Belgian Mediterranean Gull Back in Guernsey for 6th Autumn

On a largely uninspiring weekend for gull watching here in Guernsey, the highlight was the sighting on Cobo Beach of Mediterrenean Gull White 3E90, originally ringed at its nesting colony in Zandvlietsluis, Antwerpen, Belgium. This is the 6th consecutive autumn that this gull has visited Guernsey. It tends to remain in Guernsey for 6-8 weeks each autumn, before moving on (although the only current record of this bird further south was at Carcavelos, Lisbon, Portugal in January 2007). 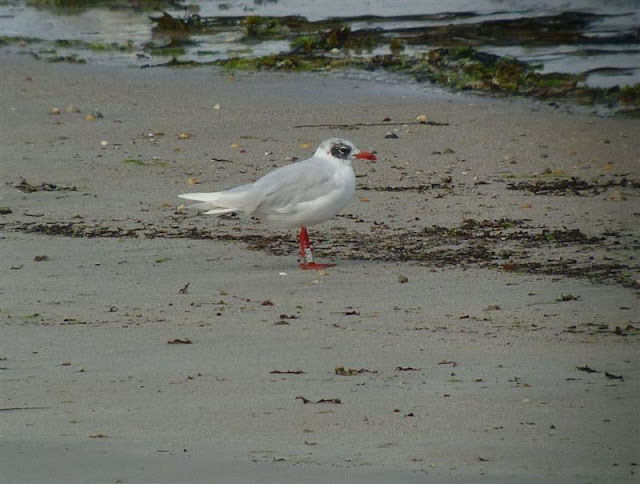 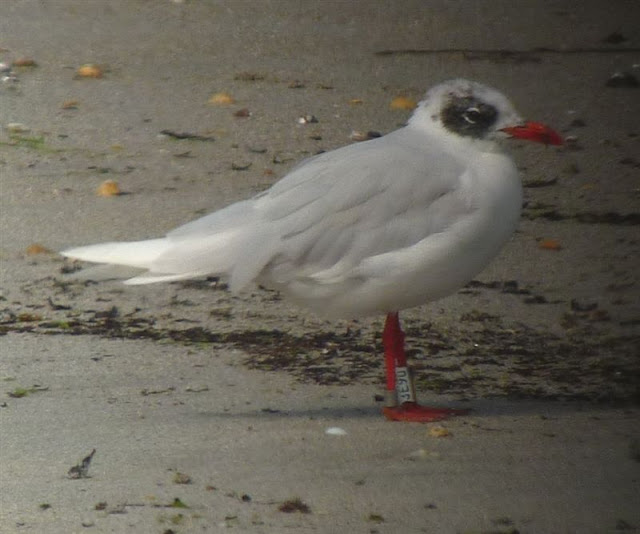 Yesterday afternoon my son (Merlin) and I went out on a boat off the east coast of Guernsey. It was  a very peaceful afternoon, with a few gulls, a Northern Fulmar and a Common Tern around the back of the boat. It reminded me how lucky we are to have all these seabirds on our doorstep! 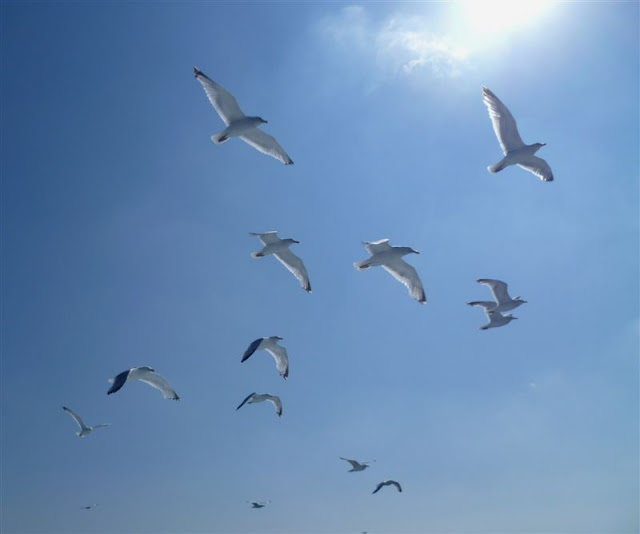 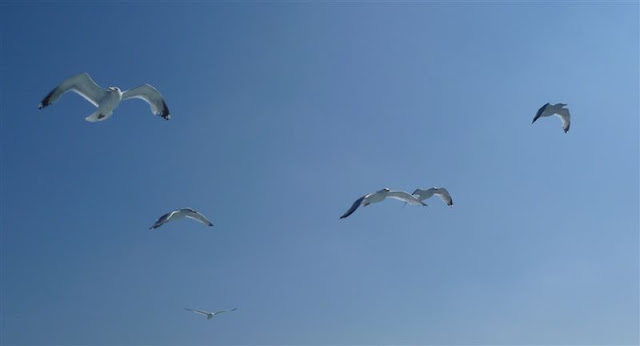 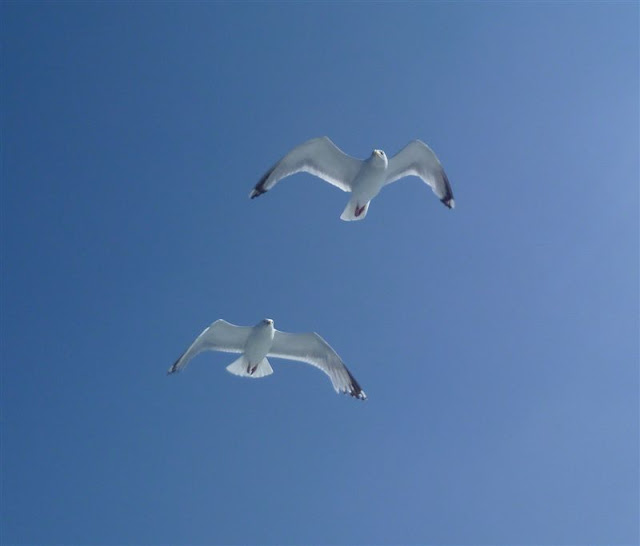 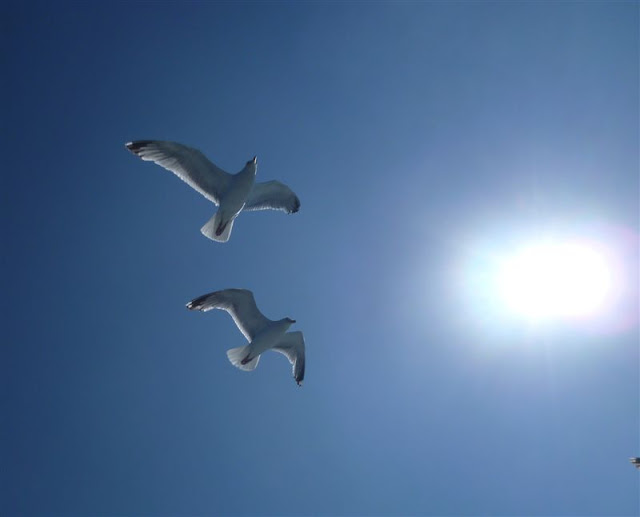 Hot on the heals of the report on 19 July of one of my Herring Gulls being seen in Seaton, Devon, England comes a report from the same location (different observer) of a second Herring Gull ringed at Chouet in May 2011 - White 7CF2.
Also yesterday came news from NW Spain (Antonio Gutierrez and José Vidal) of the first of the 2011 ringed adult Lesser Black-backed Gulls being seen back in NW Spain (A Coruna). Hopefully this will be the first of many such sightings this autumn!
Finally today I enclosed a peaceful hour recording gulls at Chouet. Nothing unusual, although there are still very few juvenile gulls on the beaches. 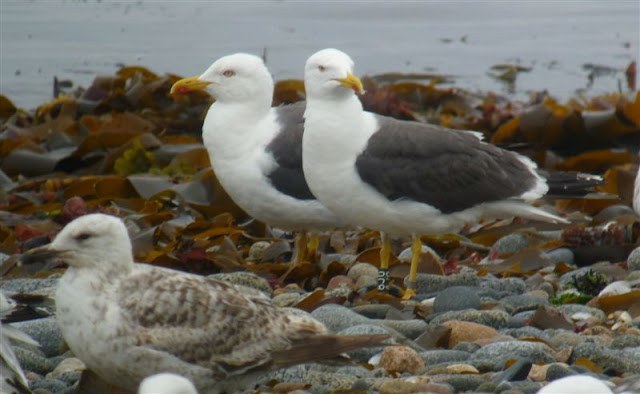 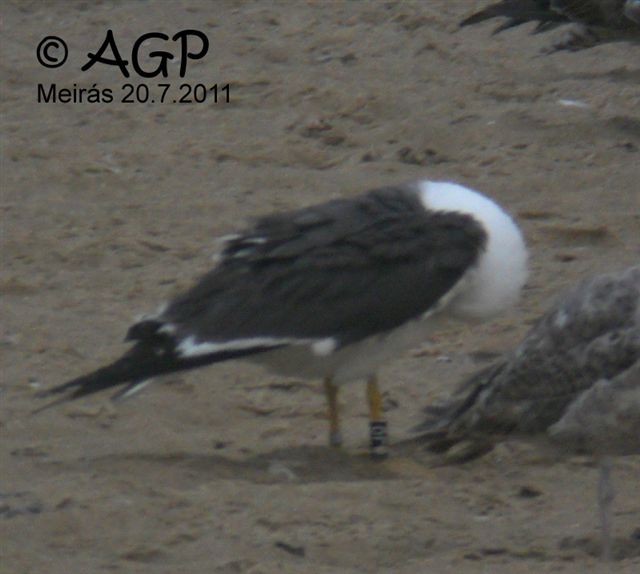 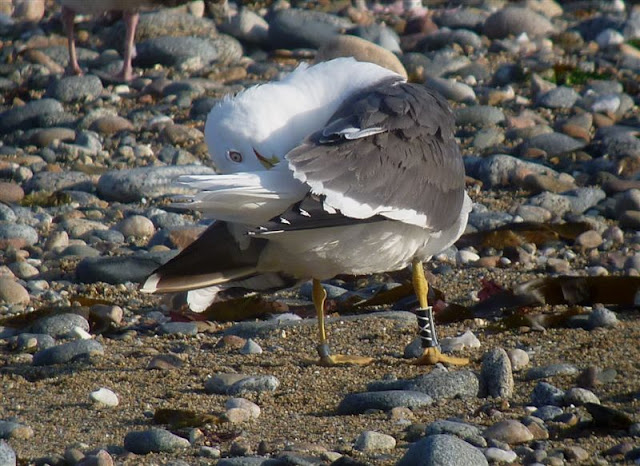 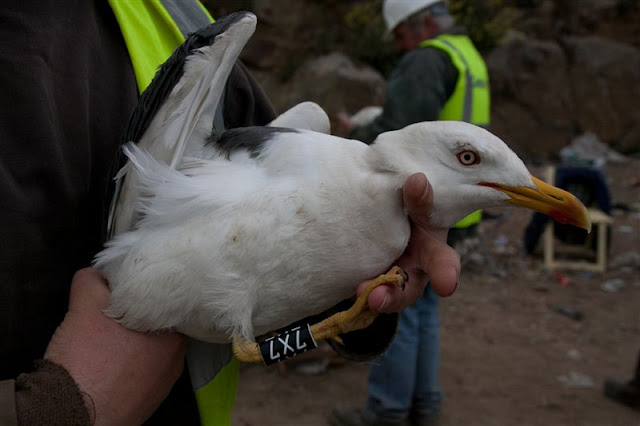 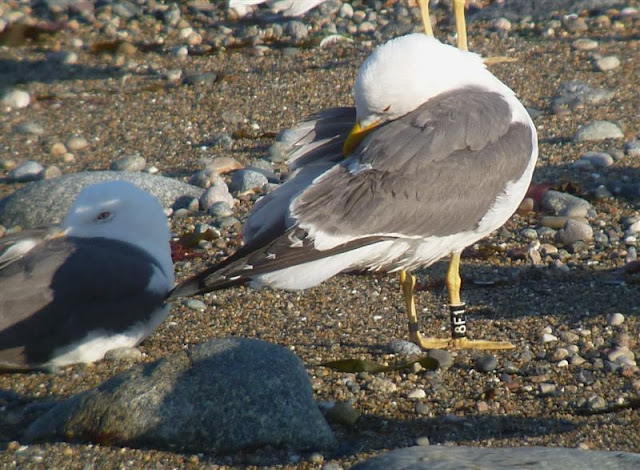 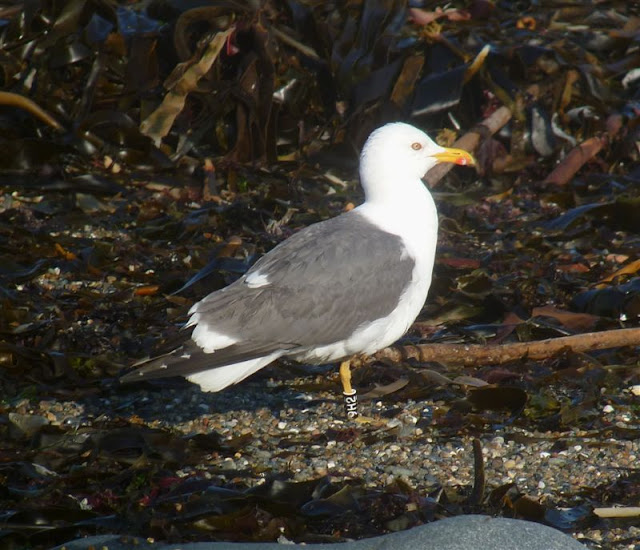 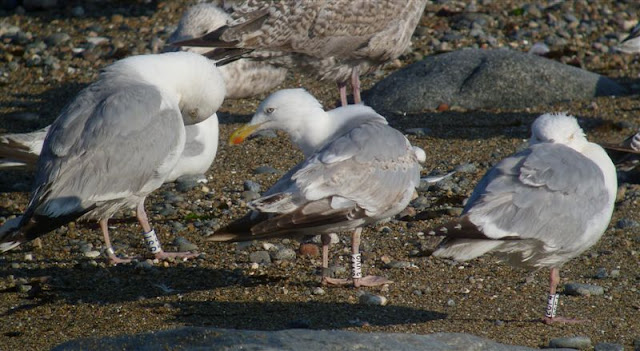 It's a Very Small World!

Something incredible happened last evening. Mike Hill - my original bird ringing trainer and friend since 1974 , who emigrated to England about 20 years ago phoned me from his home in Seaton, Devon, England  to tell me that he had a colour ringed Herring Gull standing on his roof. He gave me the number and said "I don't suppose it is one of yours" - well...it was!
Herring Gull White 2.AK4 was ringed as a 1st summer female at Chouet Landfill in May 2010. I have only seen it once subsequently - in December 2010 again at Chouet.
What are the chances of that - one of my Guernsey Gulls singling out Mike's house some 120 miles or so away across the English Channel?! I love it when life hands out such incredulous coincidences!
Posted by Guernsey Gulls at 16:37 No comments:

Another Cool Morning at Chouet

There were a few more juvenile Herring Gulls at Chouet this morning, and a reasonable number of adult Lesser Black-backed Gulls (including 68 of my colour ringed birds), but it was still cold in the NW breeze.
The Guernsey Met Office has confirmed that June 2011 was the coolest here in Guernsey since 2002 and also the windiest for 20 years. There were also many more days of  rain this year (than last) with precipitation at some stage on every day from 07 to 21 June. Guernsey Water also reports 22% more precipitation in June than the monthly average during the previous decade. Some 2.1 inches (53.3 mm) of rain fell on Guernsey during the month. This unusually wet and windy weather may well explain the widespread breeding failure of Lesser Black-backed Gulls across the Bailiwick of Guernsey this year.
Perhaps the highlight of the morning was Great Black-backed Gull Yellow 0.NN0 seen at Pembroke, as this gull was ringed as a rehabilitated bird in early June at the Guernsey Society for the Prevention of Cruelty to Animals HQ. It is testament to the care and treatment of the birds taken into care that gulls such as Yellow 0.NN0 make it back into the wild.
GBBG Yellow 0.NN0 Pembroke 19 July 2011 - PKV
GBBG Yellow 0.NN0 at GSPCA 02 June 2011 - PKV
LBBG Black 8P5 Pembroke -PKV
LBBG Black 7H7 Pembroke - PKV
LBBG Black 7A9 Pembroke - PKV
LBBG Black 7A9 when ringed at Chouet landfill 16 May 2011 - Vic Froome
﻿
Posted by Guernsey Gulls at 17:15 No comments:

On my recent gull research trip to Burhou, Alderney I was thrilled to find no fewer than 130 of my Lesser Black-backed Gulls which had original ringing details as follows:-

In addition I recorded seven of my cr Herring Gulls (all ringed originally on Guernsey) and one Great Black-backed Gull – seen only 100 metres from where it was raised on Little Burhou in the summer of 2009!
Posted by Guernsey Gulls at 20:22 No comments:

I've just come back from spending the past two days on Burhou, Alderney completing my gull research there for 2011. Although it was, as ever, a tremendous privilege to spend a little time on this magical island and to be very close to a strong colony of my favourite bird (Lesser Black-backed Gull), it was a disappointing trip because the gulls have had a mass failure again this year. This makes it three very bad years out of the last five - with only 2009 and 2010 being successful seasons for the 1,000+ pairs of Lesser Black-backed Gulls there. Lesser Black-backed Gulls have failed to breed successfully in 2011 in all the colonies I've visited on Alderney, Sark, Herm and Guernsey. I presume the cause was the very wet and windy weather just when the chicks would have been hatching.
I ringed 11 Lesser Black-backed Gull chicks, along with six Herring Gulls and one Great Black-backed Gull. On the positive side I did have plenty of time to search the colony for my colour ringed birds, and I was thrilled to record more than 140 of my gulls - including three of my 2009 chicks which are back prospecting Burhou for their future breeding attempts!

One of my longest-living birds has just been recovered. A European Shag (F11228) , which was ringed as a chick in June 1989 on Jethou, was found dead in Guernsey in June 2011 - making this bird just over 22 years old! Considering that the majority of Shags die over their first winter, this bird was a real survivor.
Gull watching was very quiet this morning, although Chouet Beach looked gorgeous in the early morning sunshine.
Shag Chicks June 2011 - PKV
Grande Fauconniere (ringing site for 22 year old Shag) - PKV
Chouet Beach 13 July 2011 - PKV
﻿
Posted by Guernsey Gulls at 08:49 No comments:

After a quick session at Chouet this morning, I drove down the west coast to try to find a few migrant  Mediterranean Gulls. There was one at Pembroke Beach and one at Saline Beach. However, they were eclipsed by a juvenile Black-headed Gull on Saline Beach with a Yellow Colour ring. The code ACZ0 revealed that this bird had been ringed as recently as 17 June 2011 at Leese Stolzenau, Kreis Nienburg, Niedersachsen, Germany by Jorg Hadasch. It was amazing to think that such a  young gull, still in very juvenile plumage should fly at least 900 km in such a short time!
Black-headed Gull Yellow ACZ0 Saline Beach, Guernsey - 12 July 2011 - PKV
﻿
Posted by Guernsey Gulls at 18:31 No comments: