Fortunately Salva Garcia has been visiting the pre-roost flock of Lesser Black-backed Gulls at Malaga Port, Spain for many winters, and he regularly reports Guernsey colour-ringed Lesser Black-backed Gulls from this site. In 2011 I was fortunate enough to join Salva and Gabriel Martin on one of their weekend visits to the port. It was a memorable experience! What makes this site so dramatic is the high concentration of LBBGs in a relatively confined area. The gulls do not roost in the harbour, but gather from mid-late afternoon before flying out to sea to roost. This weekend Salva sent the photo below, along with another seven records of Guernsey cr LBBGs - my thanks to Salva for all his hard work in the area! 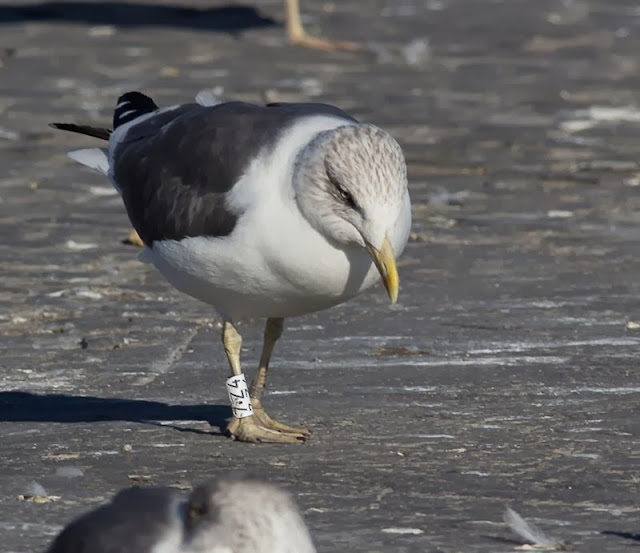 With the weather turning that little bit colder, Chris, Phil and I took a very nice catch of 126 Herring Gulls in the garden this morning. Just as last year, our single November catch was comprised very largely of 1st Winter birds (60%), with only 20% being adult birds. What is perhaps more surprising is the very low retrap rate of  only 8%...and indication of just how many Herring Gulls are attracted to Guernsey in winter probably from South-Western England and North-Western France. 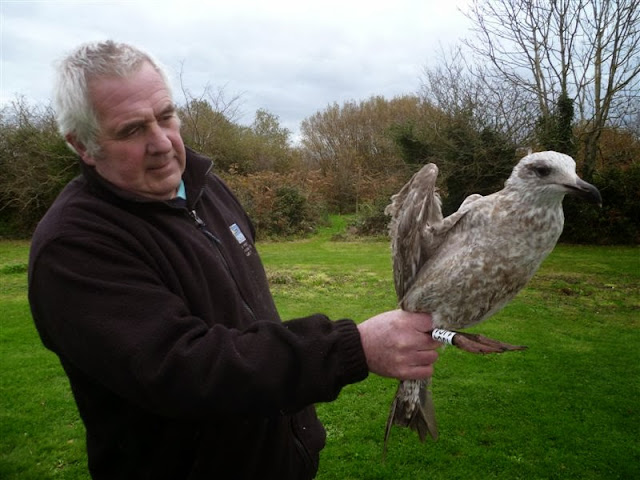 Posted by Guernsey Gulls at 12:25 No comments:

What a  difference a few days and 1,200 km distance make. At Eirol Landfill, Aveiro, Portugal last week I saw 10,000 LBBGs (including 25 Guernsey colour-ringed birds). Today back home in Guernsey at Chouet landfill I recorded (as expected) precisely zero! Over the six winters I've been studying gulls on Guernsey, LBBGs remain scarce in winter with perhaps only 10-20 birds on the Island on any winter's day.
Despite this lack of  my favourite gull, Chouet landfill was still excellent this morning. I had a thoroughly enjoyable two hour session recording just over 200 of our locally cr Herring Gulls, along with 18 GBBGs (which included three French birds (two Manche and one Seine-Maritime), one Cornish bird (Looe Island) and one Norwegian (Vest-Agder). 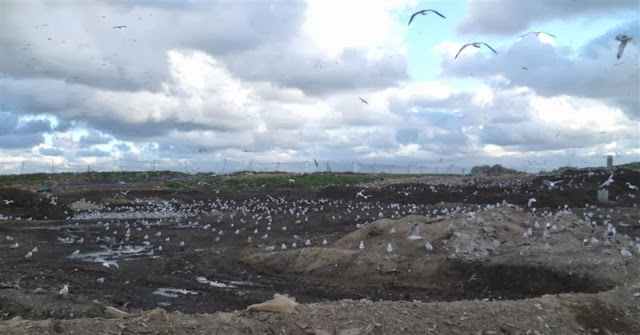 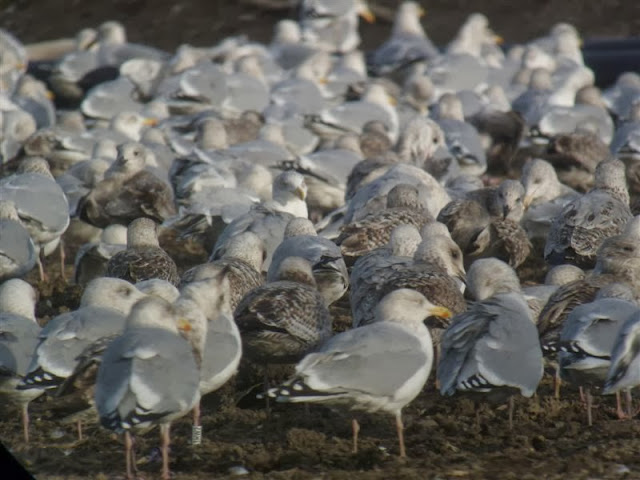 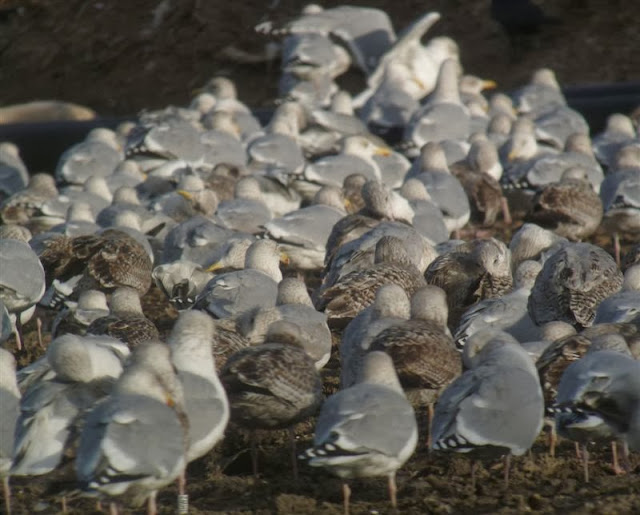 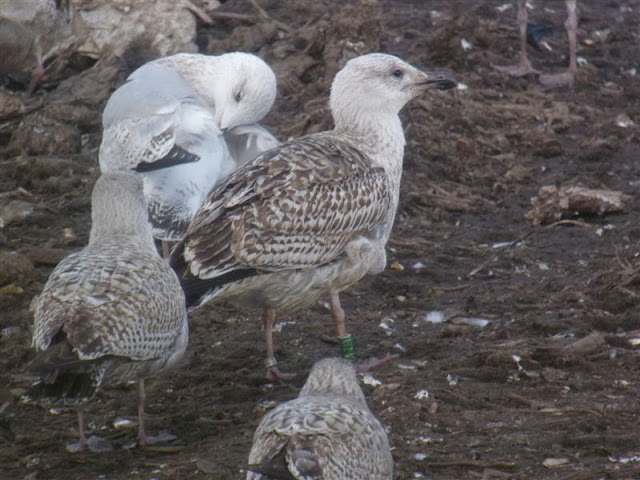 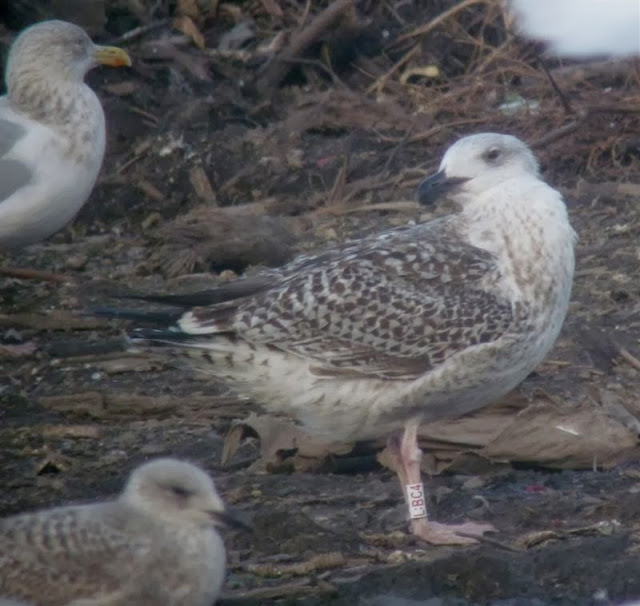 With so many gull colour ring reports coming in every week now, I rarely pick out individual birds for mention in this blog, but I'll make an exception for Black 2AS0. Ringed as a chick on Burhou, Alderney in July 2012, this gull spent its first winter around Madrid, Spain (being recorded several times from landfill sites there from 24 February to 14 April 2013). It was not recorded all summer, but then spent the autumn on  Guernsey's west coast (where I recorded in it from 05 September to 01 November). Only nine days later I caught up with this gull again 1,100 km away on Meira Beach, Coimbra, Portugal. This was not the only gull I had been watching in Guernsey during the late autumn, which I saw in Portugal on my recent trip...but there is something truly awesome following the spectacular lives of such inexperienced birds as they try to survive the most difficult and dangerous years of their lives. 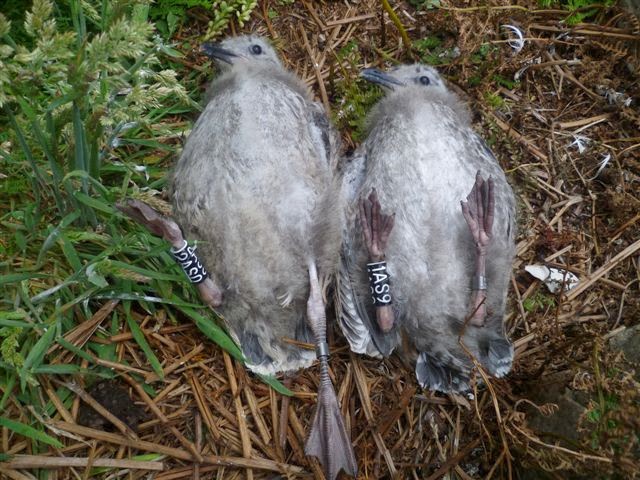 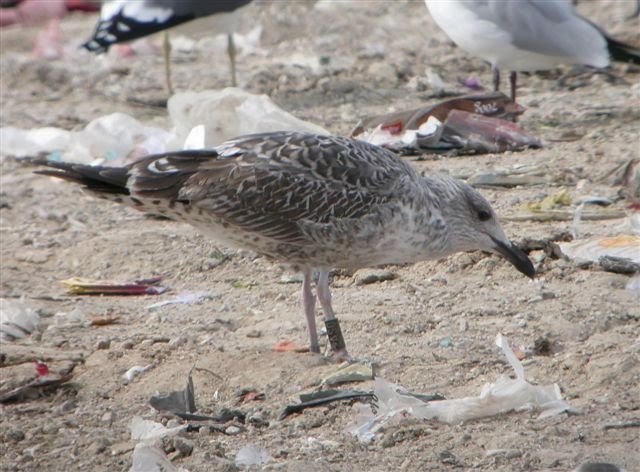 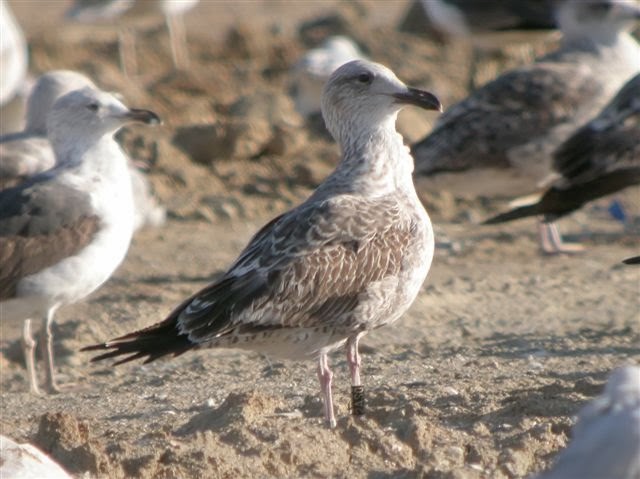 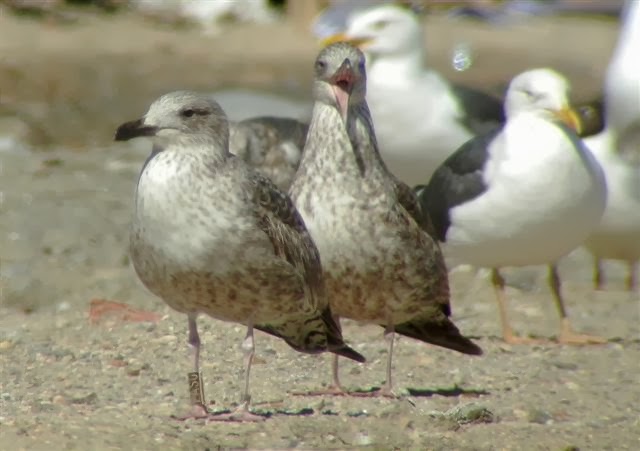 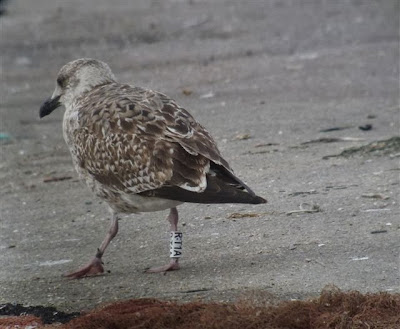 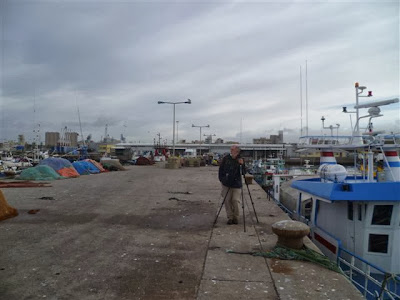 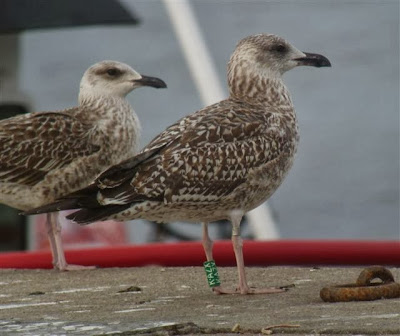 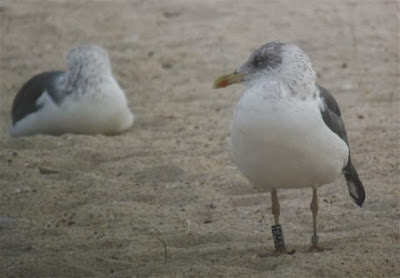 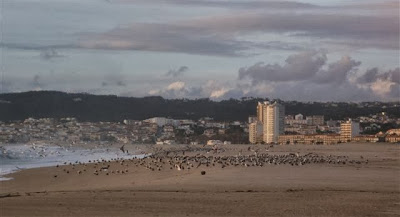 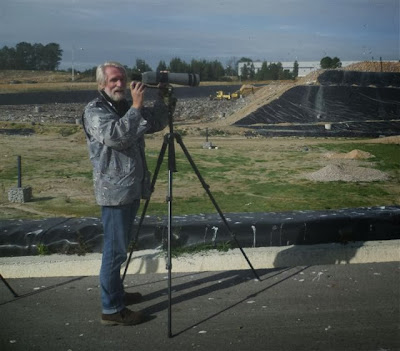 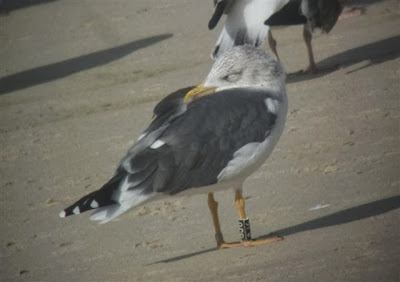 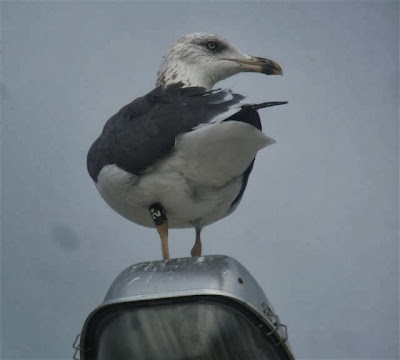 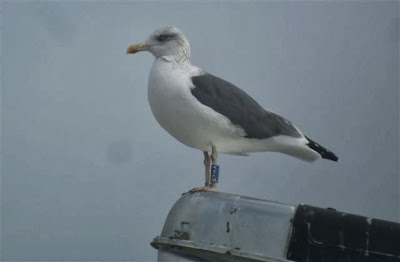 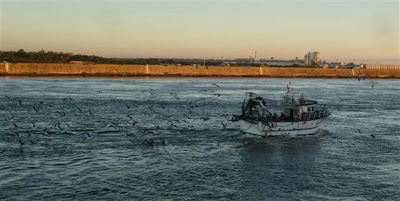 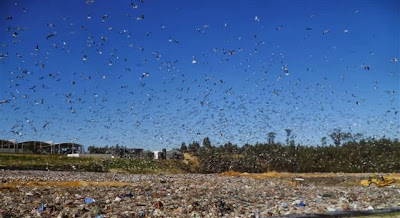 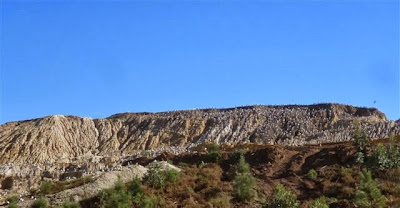 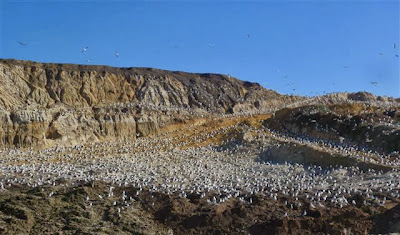 A Gull and its Shadow

I was recently sent this marvellous photo of a 1st winter Herring Gull in flight in Jersey, taken by Tim Ransom. It is such a lovely photo...especially the shadow on the sand that I asked to share it on the the blog. 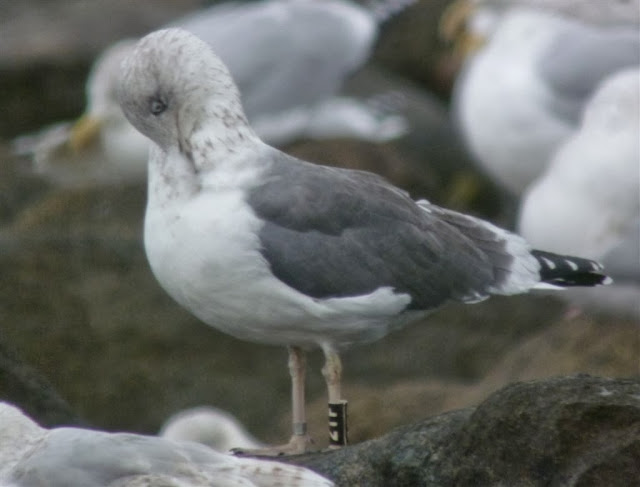 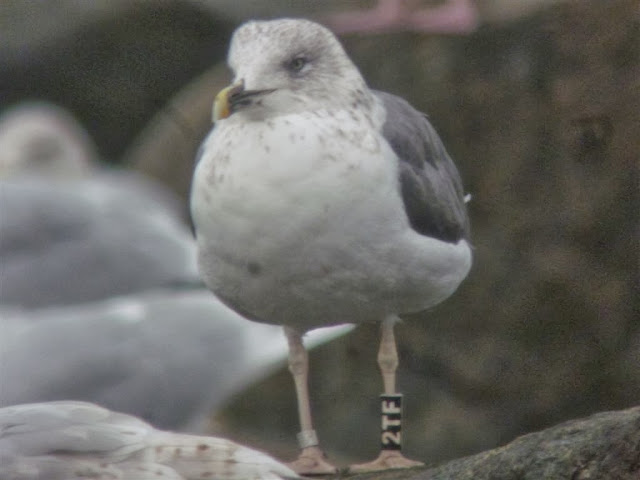 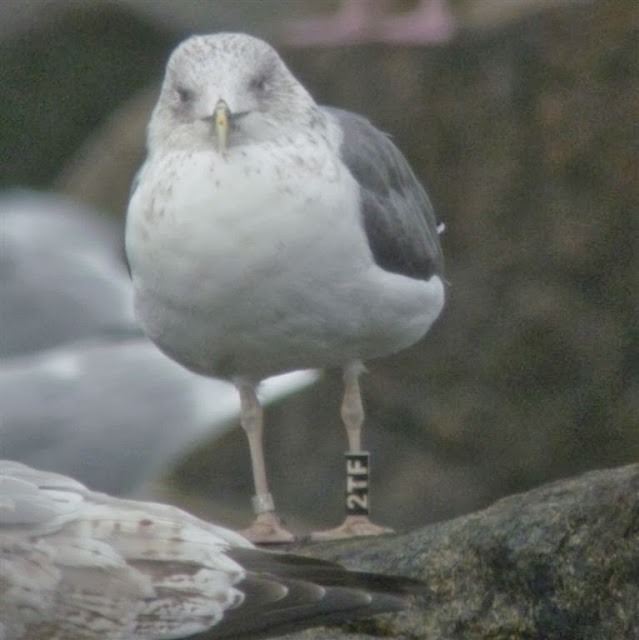