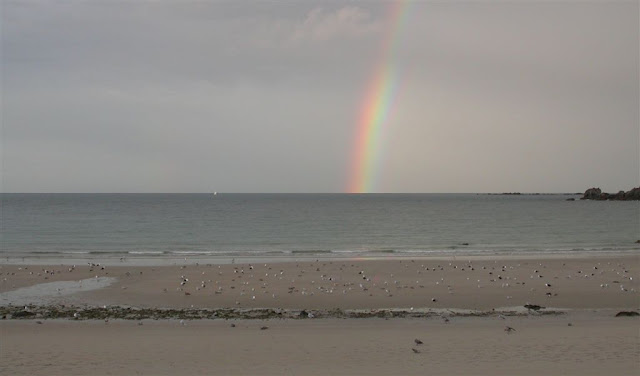 ﻿
As dusk falls this evening, I am beginning to reflect on what has been a really superb year for my gull studies based in the Bailiwick of Guernsey. The amount and quality of the data being accumulated on the three species of gull breeding in the Islands (Larus argentatus, Larus fuscus and Larus marinus) has been so good that the gull studies have totally dominated my bird watching activities in 2010.
There is not time this evening to summarise the year - and in any case I will produce another annual report during January 2011. Looking at my data for 2010 we have ringed some 1,800 gulls (1,600 colour ringed), and I have taken over 12,000 ring reads in Guernsey and Alderney. A priority now (and here a big thanks to Rich and Margaret Austin, Charles David and Helen Wain) is getting the right computer programmes to be able to analyse the data in the years ahead.
OK - before our dinner guests knock on the door - a very big THANK YOU to everyone who has helped with these gull studies both here in the Bailiwick of Guernsey and also abroad where many people have done such a fantastic job reporting the colour rings.
HAPPY NEW YEAR to EVERYONE!!!
﻿
Posted by Guernsey Gulls at 18:18 1 comment:

It is rare to receive news of my cr Herring Gulls further south than Vendeé and Charente-Maritime in France, so I was very excited today to receive news from Xabi Varela that he has seen Herring Gull White 1.XX6 at the mouth of the Castro River, Lires, A Coruna in NW Spain some 888 km from Guernsey! This bird was ringed as an adult female in May 2009 at Chouet Landfill, during the first cannon netting visit of Paul Roper and members of the North Thames Gull Group. I saw it only once more in that year (on 01 July at Chouet). I presume it wintered off island, but was recorded again between 10 February and 08 August 2010 (including by Roland-Jan Buijs when he was on holiday in Guernsey).
There have been a few records of Herring Gull chicks ringed on Guernsey by Jamie Hooper migrating this far south in their first winters - indeed one of Jamie's Herring Gulls even went as far as northern Portugal, but it is rarer (although not unknown) for adult Herring Gulls to make such long journeys. 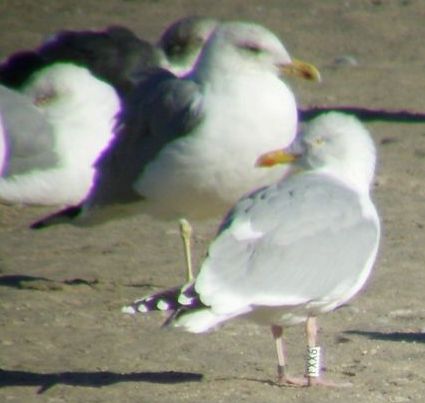 I have now been able to analyse the Lesser Black-backed Gull sightings taken the week before Christmas at Anza, Agadir. The 187 colour ring reads referred to 128 different birds - orginating in the following countries:-

Many of the project leaders have already supplied the life histories of the birds seen - and it is really interesting how site faithful some of the adult birds are to Anza in different winters. 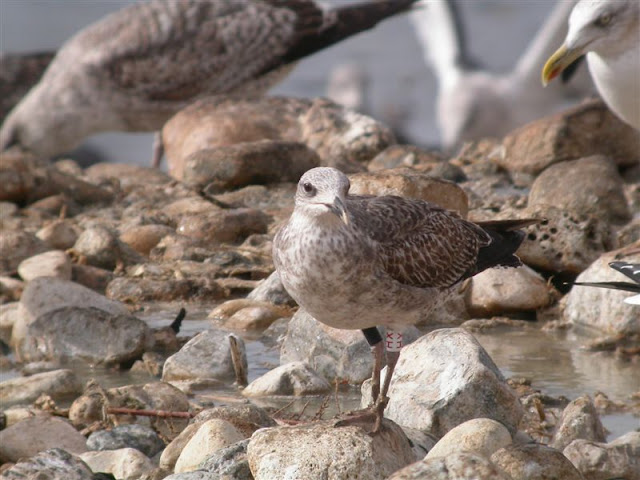 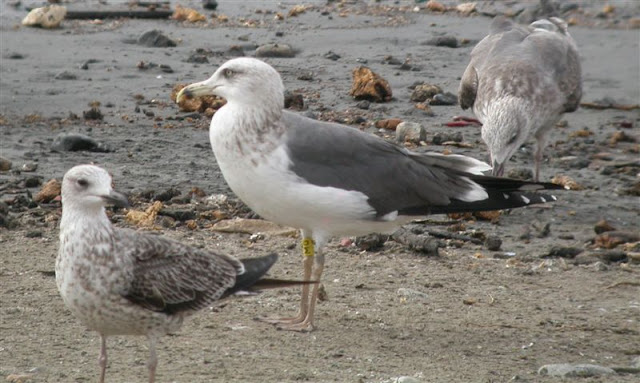 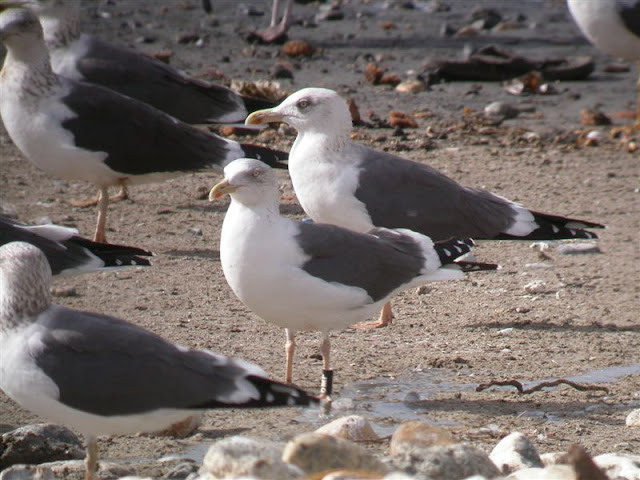 Posted by Guernsey Gulls at 10:51 No comments:

Seeing any of my colour ringed gulls outside the Channel Islands is always exciting. However...seeing my Lesser Black-backed Gulls in Africa is one of the best experiences of my 40+ years birding! I am just back from a week's holiday based in Agadir, Morocco. As this was a family holiday gull watching was naturally limited, but Anza (just to the north of Agadir port) is such an amazing site for gulls that I managed to take 200+ gull colour ring readings - including no less than seven of my own Lesser Black-backed Gulls - four of these were ringed a chicks in the summer of 2010, one as a chick in July 2009 and the other two as adults in the summer of 2010 (one on Guernsey and one on Alderney).
The one km long beach at Anza is a real magnet for gulls - the reason being the discharge pipes from the adjacent sardine processing factory. At times during my visit there must have been 20,000+ Lesser Black-backed Gulls on the beach. The gulls were not very approachable on the beach, and I soon learnt to concentrate not on the large numbers resting on the beach, but on the gulls feeding at the discharge pipes. Although the high turnover and very active behaviour of the gulls made ring reading challenging at times, the birds were at very close range. Many of the gulls had small amounts of oil on their feet and legs, and several of the colour rings were tough to read because they were smeared with oil.
LBBGs dominate the gull flocks at Anza. The only other colour rings read were a single Mediterranean Gull (Poland) and Yellow-legged Gull (Spain). On the beaches further north around Taghazout and Aghroud, and at the mouth of the Tamri, a few more cr LBBGs were seen, but in these areas Audouin's Gulls dominated...and 25+ cr readings of these gulls were taken. Finally I was really surprised on my first visit to Anza to see an adult Franklin's Gull (still mostly in summer plumage).
Over the next few days I'll post a quick summary of the origins of the Lesser Black-backled Gulls recorded, along with a very short summary of the other birding highlights from this quick trip south. 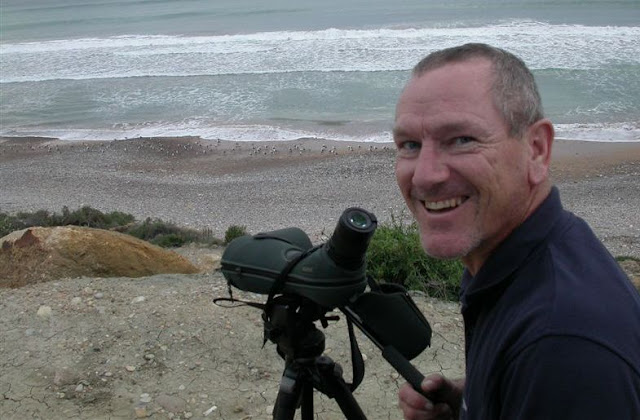 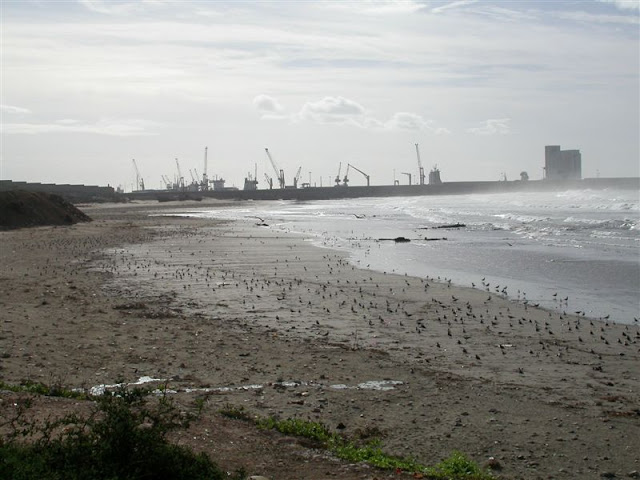 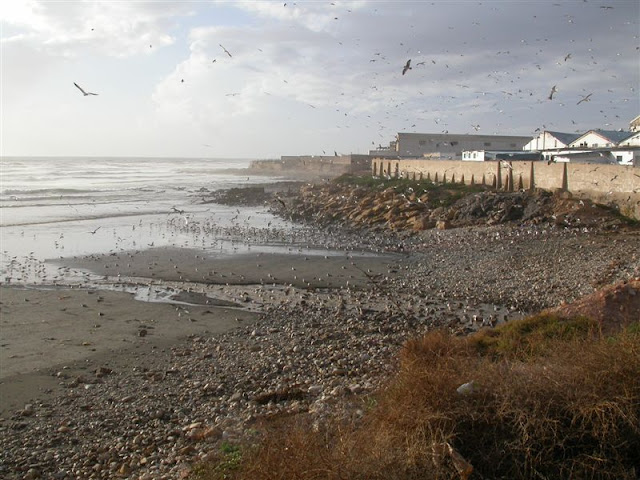 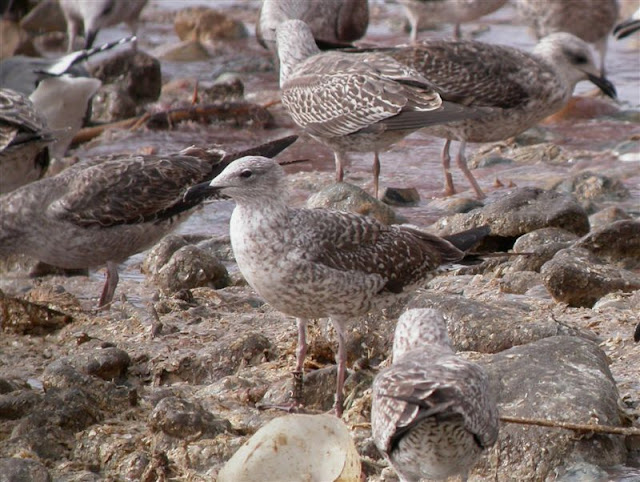 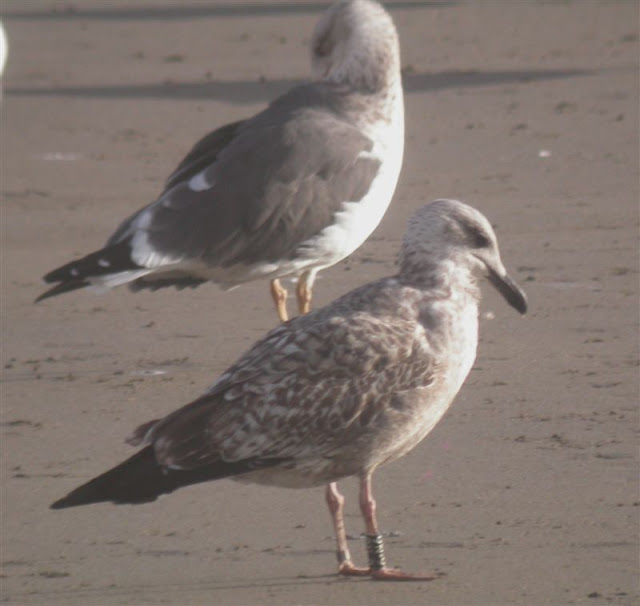 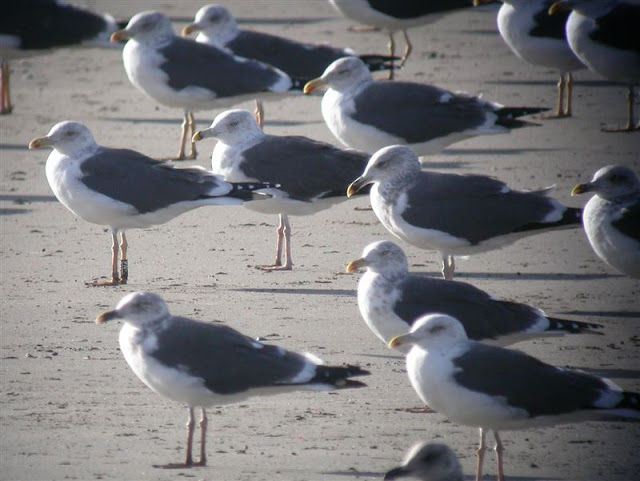 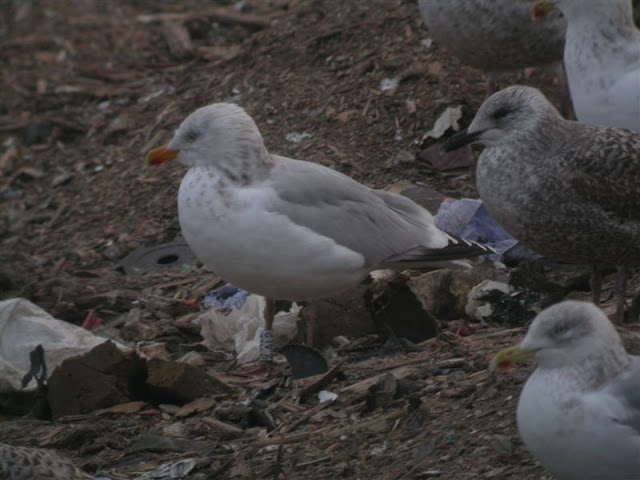 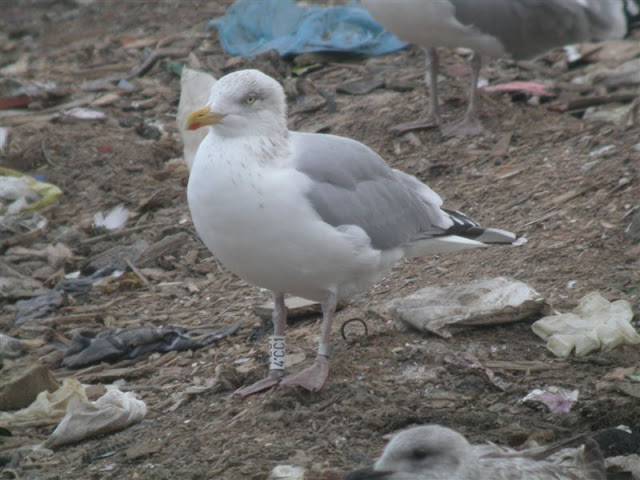 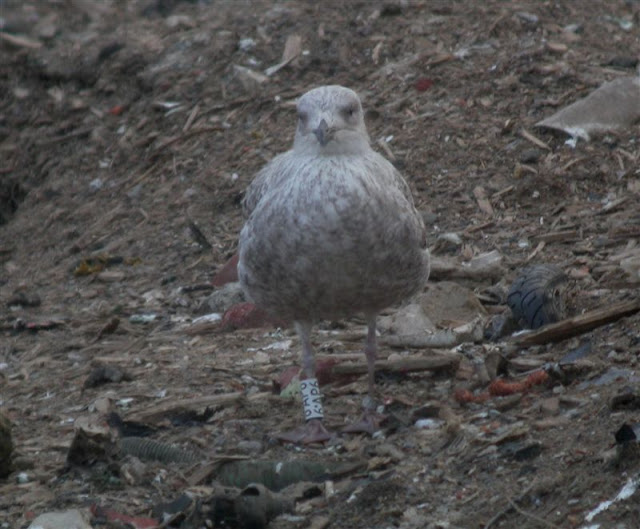 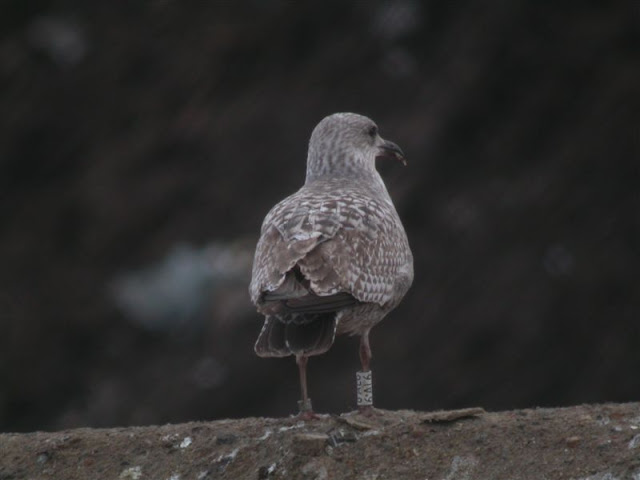 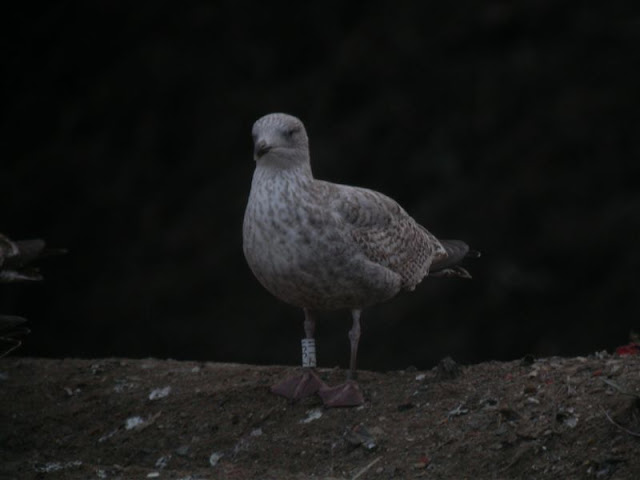 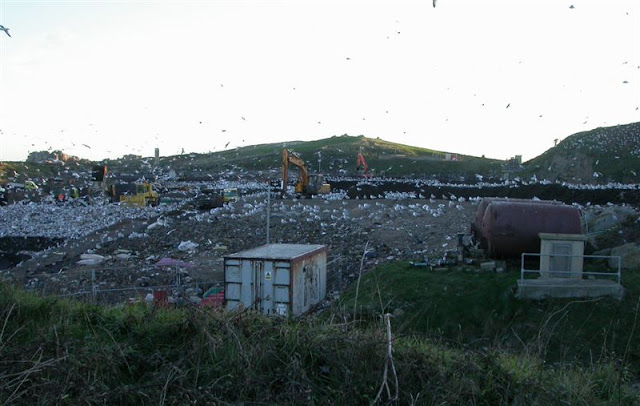 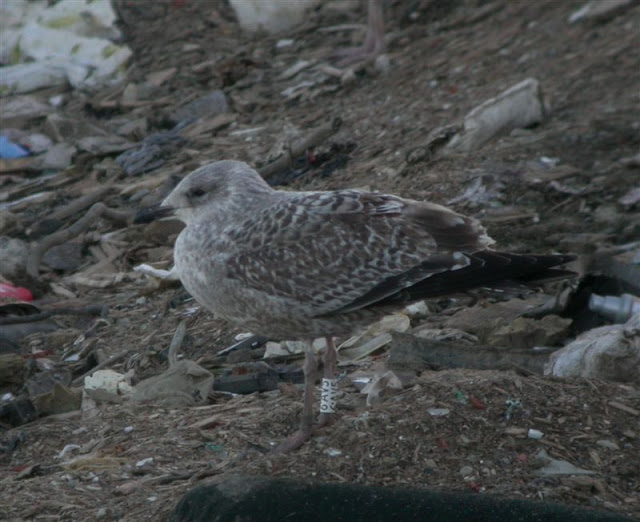 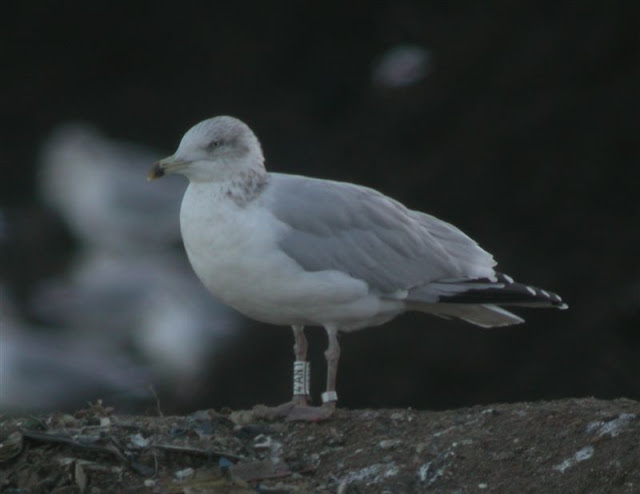 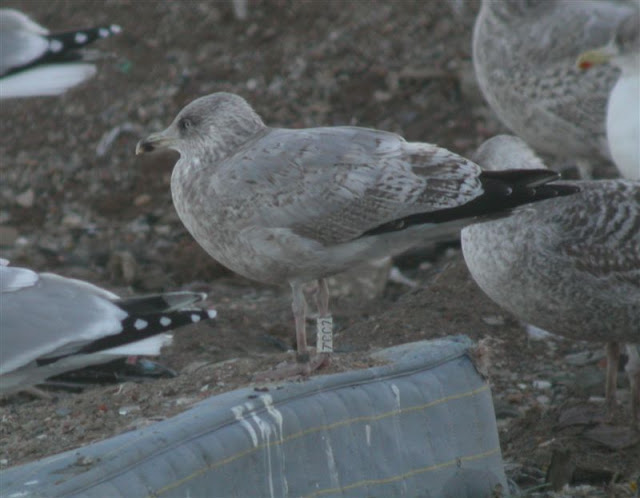 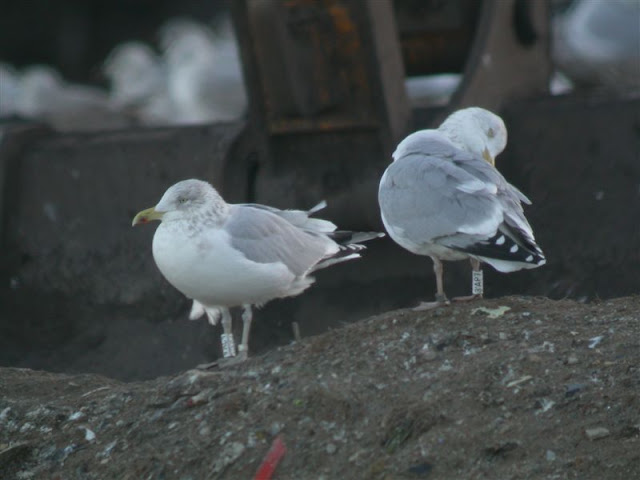 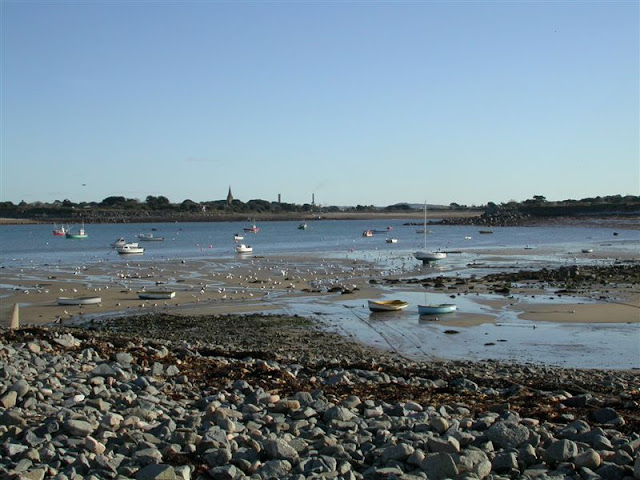 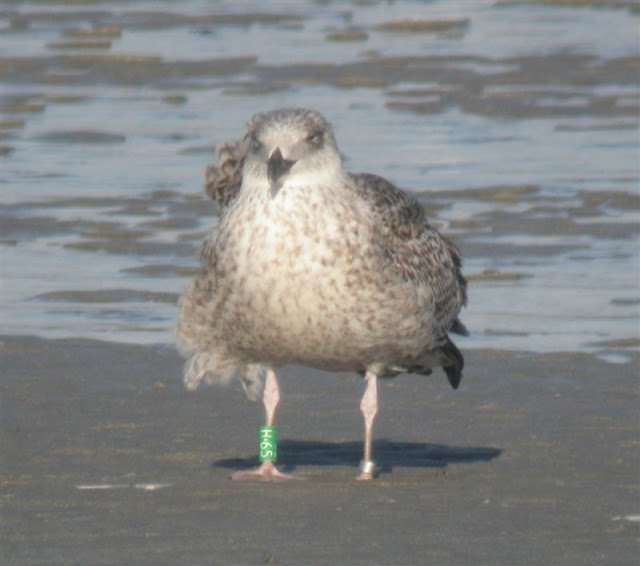 Some fascinating news came in today from Benjamin Griard regarding Lesser Black-backed Gull Black 3.C6 - an adult male ringed on 28/05/10 at Chouet landfill, Guernsey. Benjamin saw this gull yesterday at Sonzay Landfill, Indre-et-Loire, France (313km SE of Guernsey). This in itself is not unusual for I am discovering that a minority of LBBGs breeding in the Bailiwick of Guernsey winter at the landfills in NW France. What makes Black 3.C6 rather special is that this very gull was recorded by Salva Garcia on 05 September and 30 October this year at Malaga Port, Southern Spain (some 1432 km south of Guernsey). I expect my first breeding LBBGs to return to Guernsey by mid January so maybe Black 3.C6 will be one of the first to return next month. It will be really interesting to see.
My theory that no Lesser Black-backed Gulls breeding in Guerney remain in the Islands in November/December is still intact! The last observation of a Guernsey colour-ringed LBBG in Guernsey was taken in mid October! 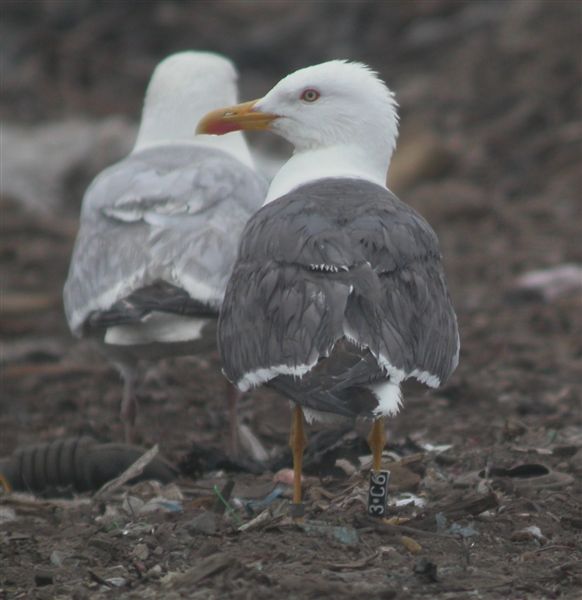 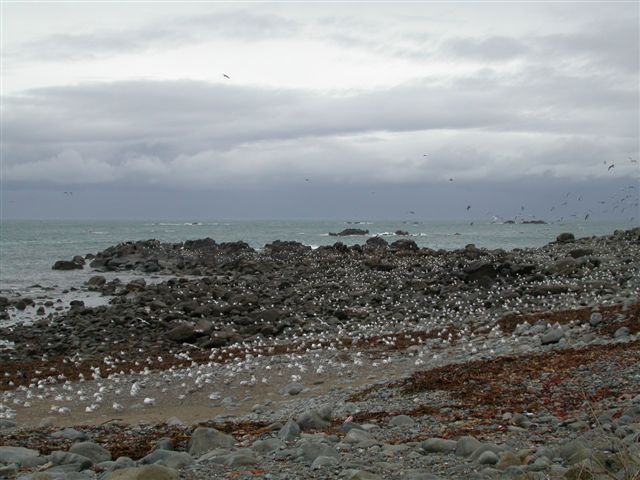 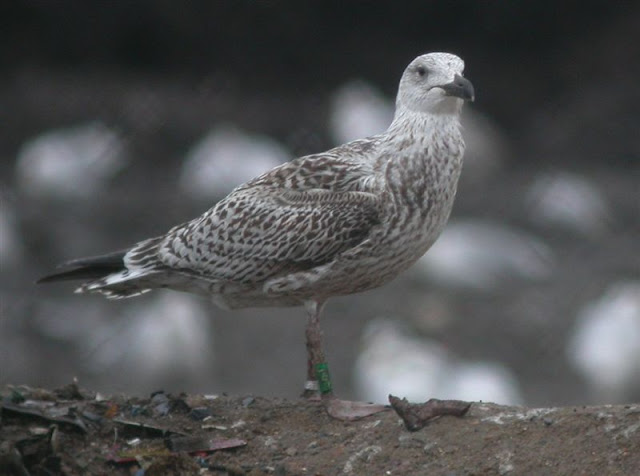 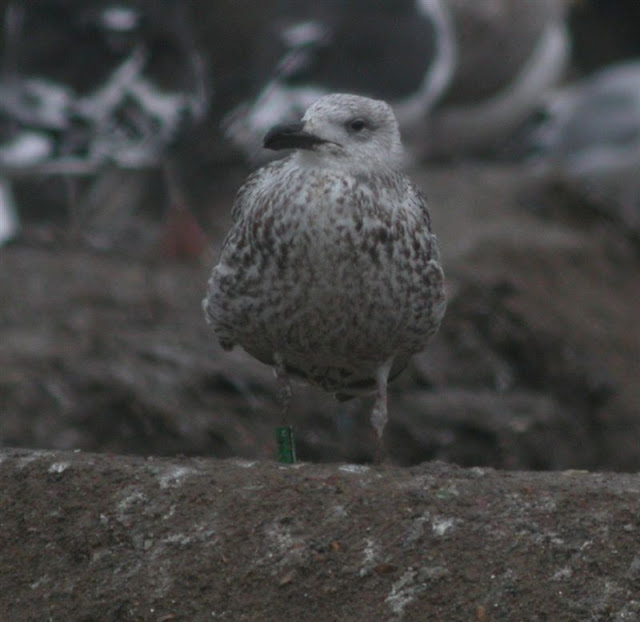 A few Gulls before work

I managed to get out for half an hour before work today to check Chouet for gulls. Given the recent cold  weather with snow (very unusual in Guernsey!) I thought there may be an influx. However, it was pretty much business as usual with Chouet landfill busy with several thousand Herring Gulls and up to 60 Great Black-backed Gulls - including two well-known birds from Chausey Islands, France (Seb Provost) (Green E.71 and Green E.87), and on the beach there was another French colour-ringed GBBG from Le Havre, Seine-Maritime, France (Gilles Le Guillou). Again this bird  (Blue 77C) is well known in Guernsey. 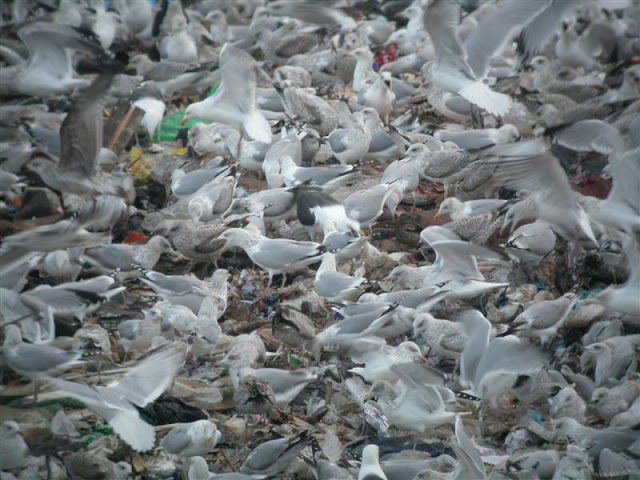