This morning at Chouet landfill was just like old times, with a tremendous amount of gull activity. Although the wind was still quite strong , the gulls were far more settled today, enabling me to read 70 of my colour ringed LBBGs - many for the first time this season after spending the autumn/winter in Iberia.
Posted by Guernsey Gulls at 15:57 No comments:

Originally Chris, Phil and I were hoping today to take a modest gull catch at Chouet landfill. However, the stiff NE wind and frequent sleet showers persuaded us to postpone the effort for another week. I still went into the landfill to record colour rings...and was richly rewarded with one of my best sessions of the year so far. Amongst the 50+ cr LBBGs was my first Spanish bird from a project run at a landfill in Western Spain - Orange T121. All the remaining LBBG sightings were our returning birds.
There were also at least two adult Yellow-legged Gulls in the Landfill this morning.
Today I had a fantastic spot close to the tipping face, but with a very nice view down onto one of the main resting areas for the gulls. For the last 15 minutes of the session I put down my telescope, binoculars and note pad and simply watched the gulls manoeuvring over the tipping face, some only a few metres from me. It is such a privilege to watch such birds mastering flight in such a dense pack. For me these birds are amongst the most beautiful that we see every day! All in all a really Top Morning! 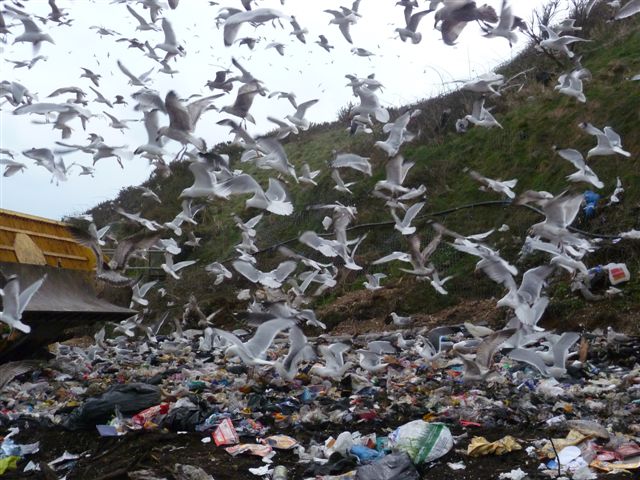 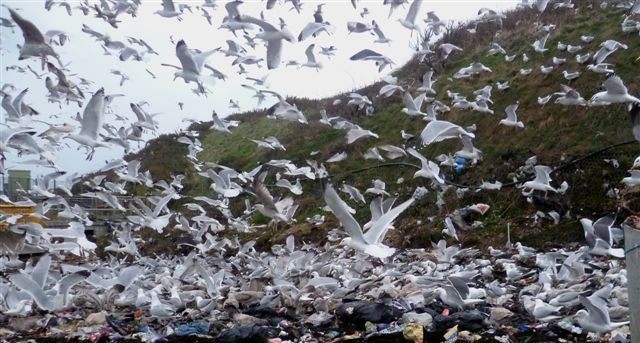 Posted by Guernsey Gulls at 17:01 No comments:

And Today a Norwegian LBBG!

Some hard work at Chouet Landfill this morning and then around the northern beaches today paid off handsomely with 47 colour ring reads on Lesser Black-backed Gulls. The last ring observed was at Chouet Beach - Blue J73E - a bird ringed as a chick on Rauna, Vest-Agder, Norway in July 2002. This bird has been recorded back in Vest-Agder in 2008, 2009, 2011 and 2012.
The increase in records for Yellow-legged Gull continued with a 2nd winter bird on Chouet landfill Beach (this is my 7th confirmed sighting this year). 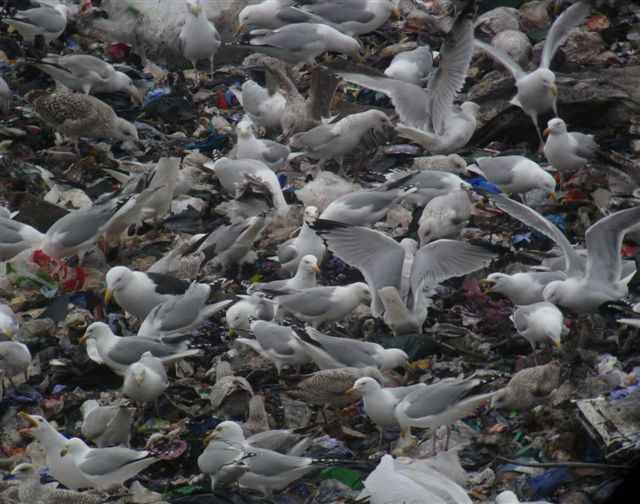 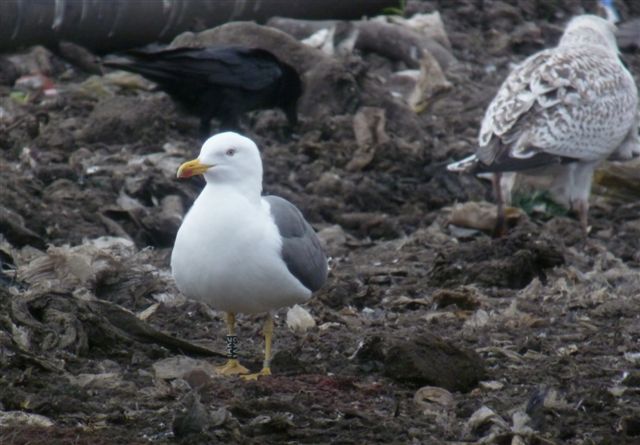 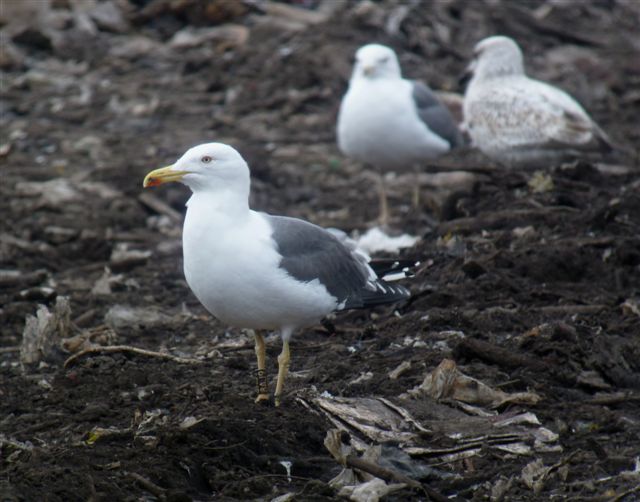 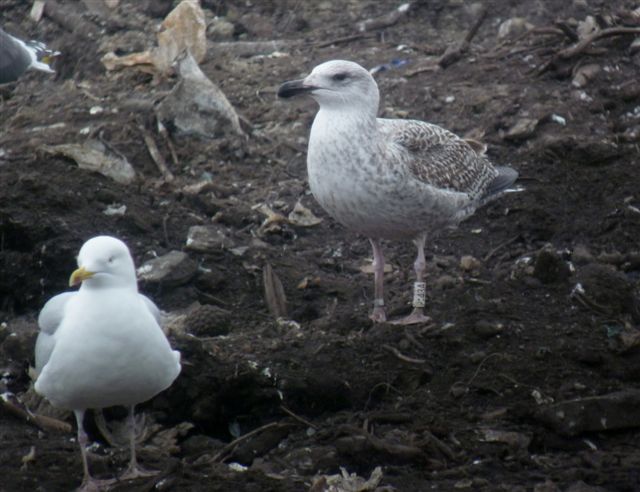 Gulls at Chouet Landfill - (c) PKV
Posted by Guernsey Gulls at 18:18 No comments:

Viewing conditions were difficult today with fairly distant gulls and a stiff easterly wind. Two Norwegian Great Black-backed Gulls were observed on the beaches at Chouet (both ringed in Vest-Agder, SW Norway), and amongst the 34 cr LBBGs recorded was Yellow L:X (a bird ringed as a chick in Bath in 2001 by Peter Rock). Clearly gulls are well on the move now! 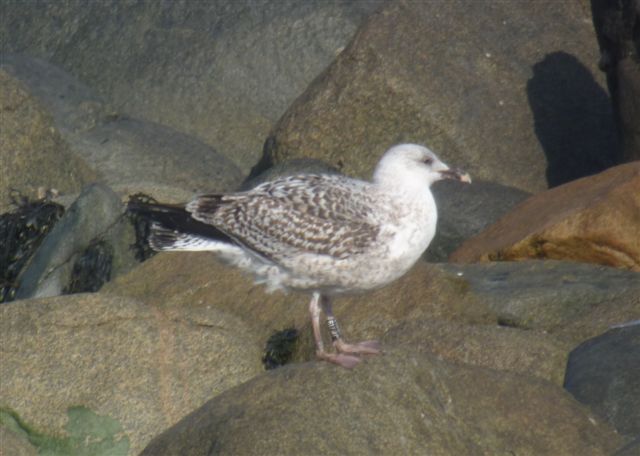 Half a Century of cr LBBGs this Weekend!

Lesser Black-backed Gulls continue to return to the Islands apace with 50 colour ring observations on Friday, Saturday and Sunday in the Chouet area. Many of these birds had been reported over the winter in Iberia or France. The complete absence this winter of large “white-winged” gulls continues, but another adult Yellow-legged Gull was observed on Chouet Beach. 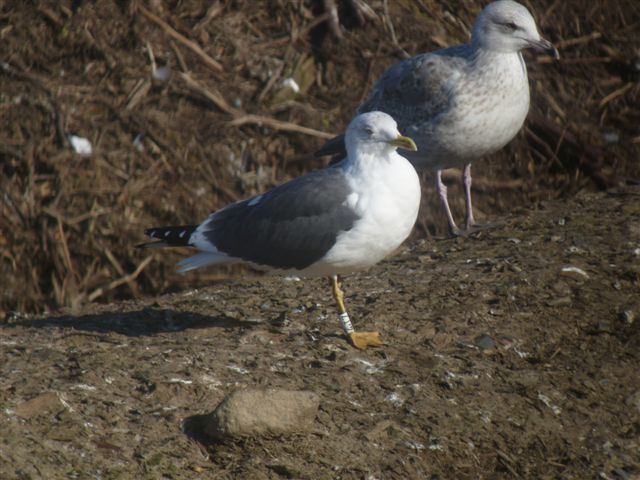 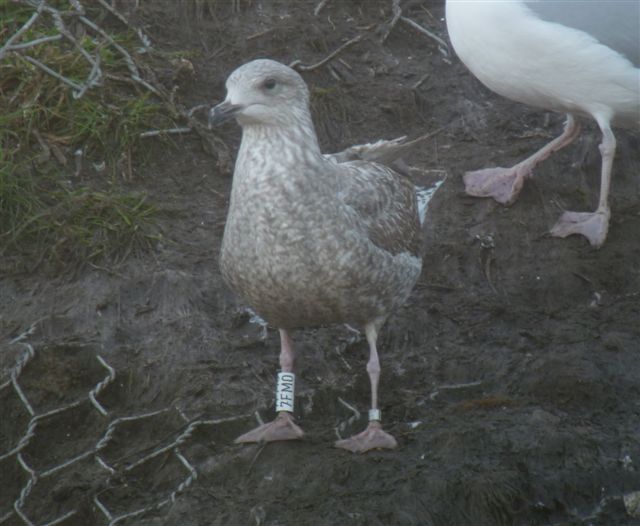 LBBG White 8.Z0 Back from Morocco!

What I thought was a very modest session at Chouet landfill this morning with very flighty gulls and difficult viewing conditions...and only eight cr LBBGs recorded...in fact was a fantastic session! This is because LBBG White 8.Z0 was showing very nicely at the tipping face. This gull was ringed in May 2009 at Chouet and it already has a very nice long life history of sightings involving sightings in France and Portugal. However...my last observation of this gull was on 10 December 2012 some 2,200 km away at Anza Beach, Agadir, MOROCCO! I remember this observation so well...and am in awe of the incredible journey this gull has made. Observations such as this provide the greatest thrill of my birding these days!
Another of the cr LBBGs I recorded back today for the first time this spring was White 9.T5, a bird now in its 21st year. I originally ringed this bird as a chick on Burhou, Alderney in July 1992, and we added the colour ring at Chouet in June 2009 (since when it has been recorded in France and Spain). 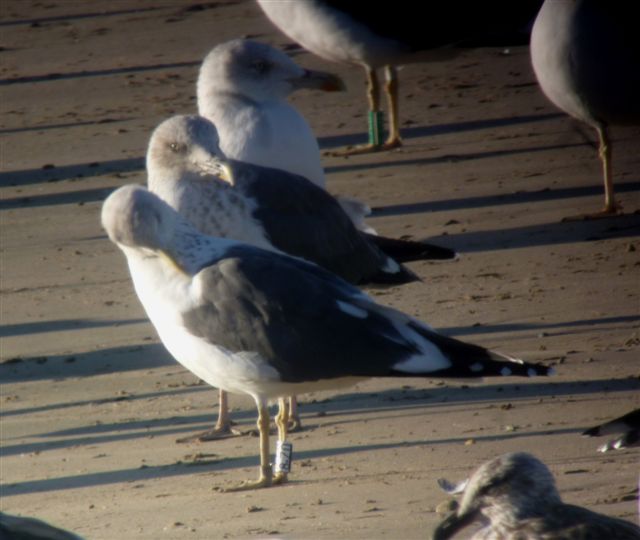 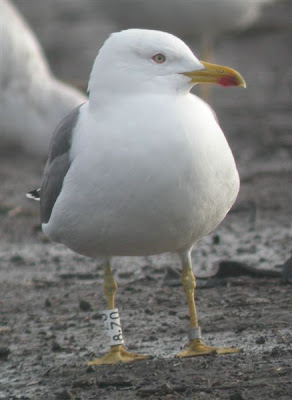 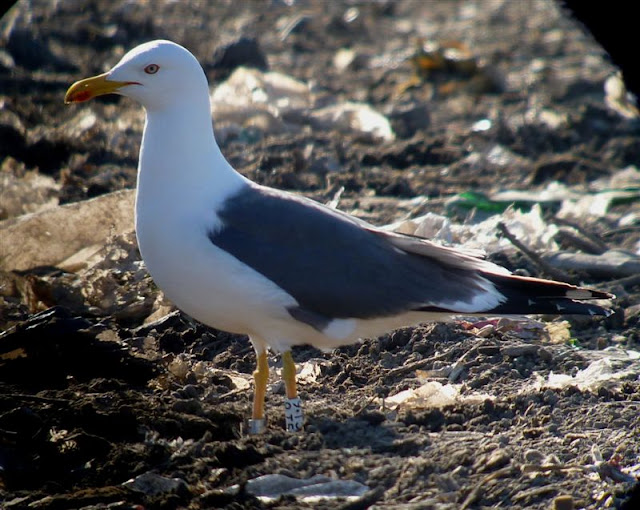 Yellow-legged Gull Back for Another Season?!

Almost to the day Yellow-legged Gull White 1CA9 has been spotted again in Guernsey. This bird was caught and ringed as an adult at Chouet Landfill in May 2011. It was then not seen again until the 15th February 2012, when it turned up again at Chouet. I then recorded it several times up to 21st April. I saw it again on 16 August...and then nothing...until yesterday when it re-appeared at Chouet. I do not know where this gull nests, presumably in a mixed pair with a Herring Gull somewhere in the Channel Islands? Now there’s a challenge for Island birders this summer – find where this Yellow-legged Gull is nesting, and confirm what species is its partner?! 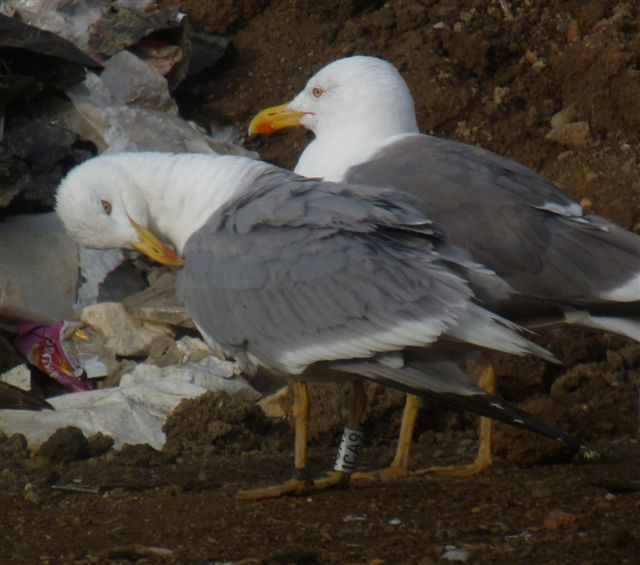 Another Gull Catch at Chouet

With a little more time this morning, Chris, Phil and I took a very nice catch of 85 gulls at Chouet landfill. The vast majority were Herring Gulls (82), and this number included 18 retraps (some of which needed a colour ring added or replaced). There was also one adult Great Black-backed Gull to keep Chris happy, while the two Lesser Black-backed Gulls certainly brought a large grin to my face! No time for any photos though - too busy!
Posted by Guernsey Gulls at 14:52 No comments:

Juan Cabeza e-mailed yesterday with exciting news of a Guernsey-ringed Herring Gull at Boca do Rio, Porto do Sol, A Coruna, SPAIN on 9th February. White 5CK9 had been ringed at Chouet Landfill in May 2011, and had been seen at Sark Harbour in June 2012, indicating that this could be a breeding bird from that island. Although not unique it remains rare for Channel Islands nesting Herring Gulls to travel as far as North-west Spain each winter. The straight line distance of the movement is c 900 km! 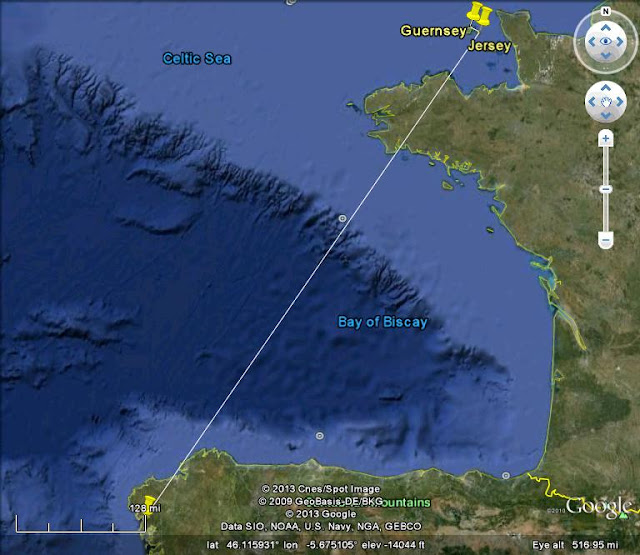 The Migration of Herring Gull White 5CK9
Posted by Guernsey Gulls at 16:24 No comments:

Finally Chris Mourant and I got the 2013 gull ringing season under way with a small but timely catch of gulls at Chouet. Unfortunately the gulls decided to co-operate very late in the morning, so it was a huge rush to try to ring as many of the gulls as possible before closing time. We managed to ring 19 new Herring Gulls and to record four re-traps (the oldest of which was ringed as a chick in Jersey in June 1998). Amongst the catch were two Great Black-backed Gulls (an adult and a 1st summer). We had to release eight Herring Gulls unringed...which bearing in mind all the work we've put in this year to catch them was a little difficult...but very necessary to leave on time!
Posted by Guernsey Gulls at 17:56 No comments:

Highlights of a two session in Chouet landfill this morning included another adult Yellow-legged Gull and 19 colour-ringed Lesser Black-backed Gulls. Amongst the 11 cr Great Black-backed Gulls was Orange PF6T - 13 months since its last sighting in Guernsey. This bird was ringed at Rainham Landfill in January 2011. 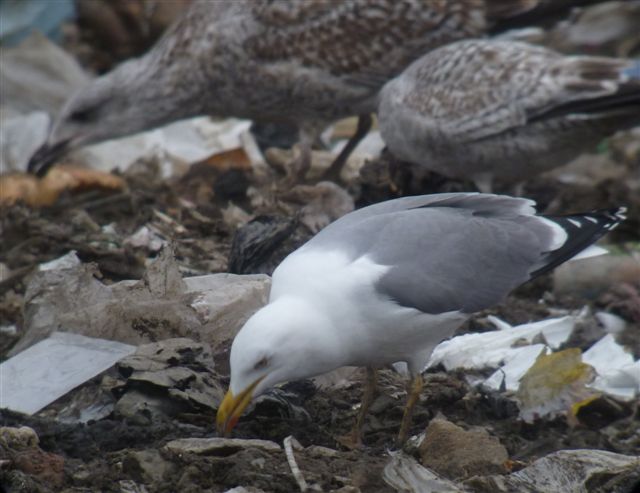 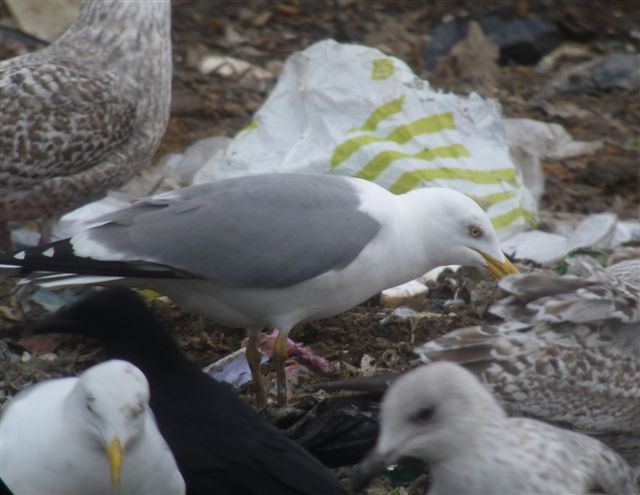 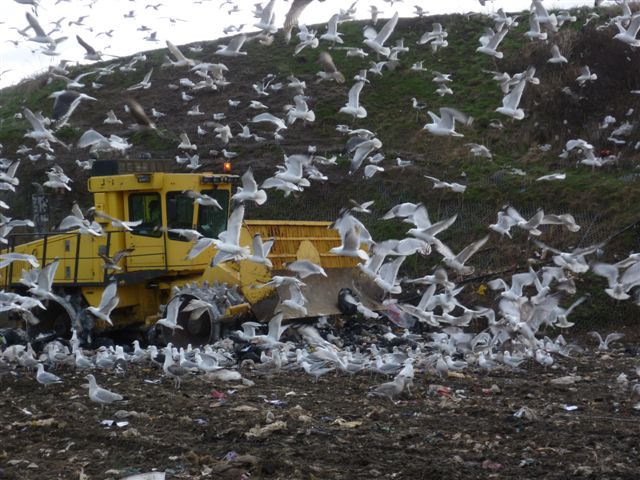 Posted by Guernsey Gulls at 15:39 No comments:

Today I also saw both Polish colour-ringed Black-headed Gulls that winter in the islands - White TARM was at Grand Havre, while White TETT was on L'Ancresse Common. Both gulls were ringed at the same site in Poland- Przykona Reservoir, Radyczyny, Turek by Tomasz Iciek. TARM was ringed as an adult in June 2010, while TETT was ringed as a chick the following June. 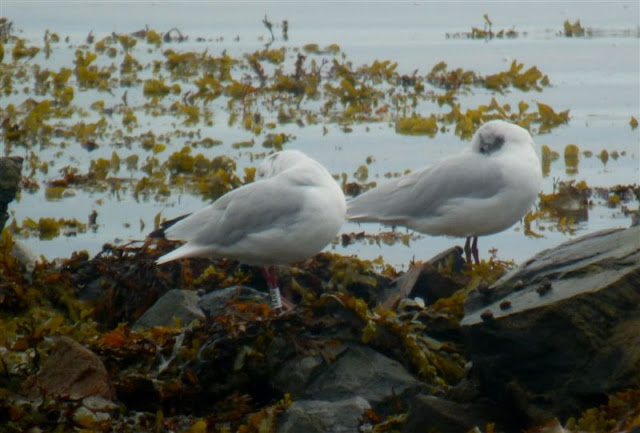 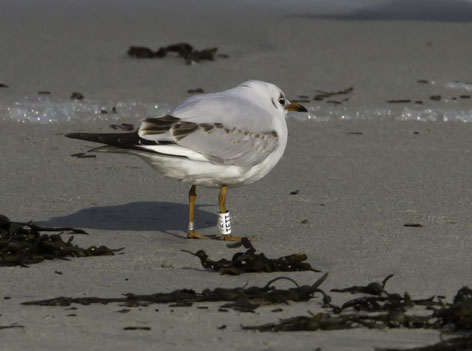 The Flood Gates Begin to Open!

A great day today with c 50 LBBGs back at Chouet - including 16 colour ringed birds. Six of these gulls were recorded over the winter in Spain (three), Portugal (two) and France (one). The weather is not yet spring-like, but it would seem that the early returning birds can wait no longer.Most birds were seen on the beach at low tide - too far for photography. I'm just very happy that the flood gates are opening and now virtually by the day I can expect more and more LBBGs back on our beaches!
Posted by Guernsey Gulls at 15:31 No comments:

In recent days I've spent two early mornings at Chouet landfill. The weather conditions with very strong northerly winds and frequent showers have made gull recording very difficult, and I have missed more ring reads on my returning Lesser Black-backed Gulls than I've actually made (eight in total). Eventually I managed c 150 Herring Gull ring reads and 44 GBBGs (including 12 French and two English - all birds that have been recorded previously at some point in Guernsey). A half-hearted attempt to ring our first few gulls of the year in the garden on Sunday morning looks like ending with yet another blank! And finally there is still not a sign this winter of either a Glaucous or Iceland Gull in Guernsey...although we live in hope! 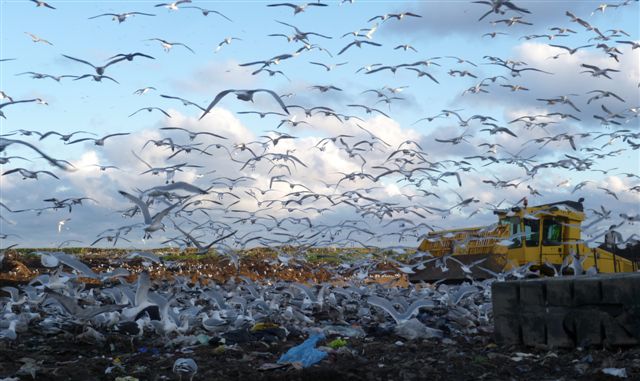 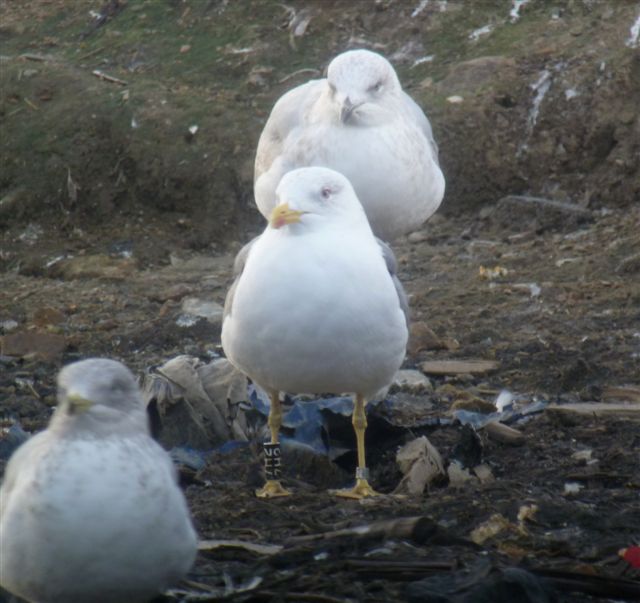 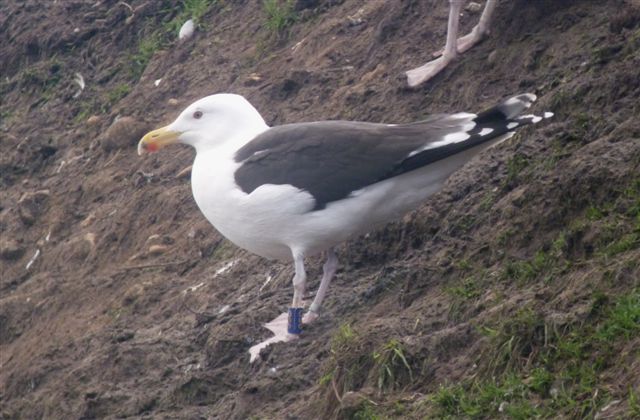 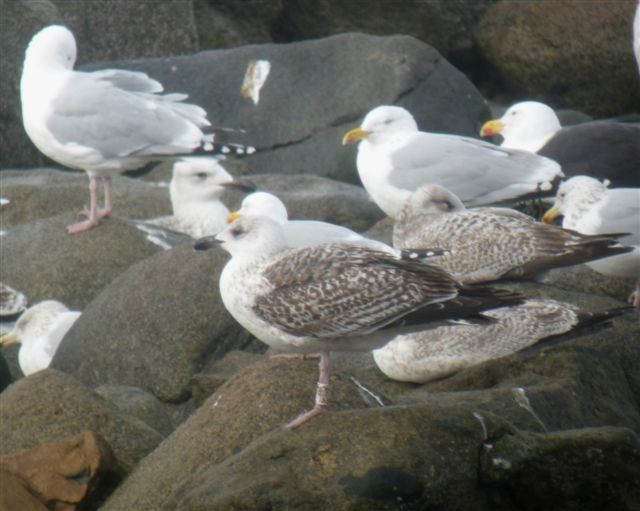 Posted by Guernsey Gulls at 09:04 No comments: