A couple of Eurasian Spoonbills have been in Guernsey for the past few days. Thanks to the excellent photos by Tony Loaring we now have details of both birds. The one with the colour rings was ringed as a nestling on the German Wadden Sea island of Mellum on 30 May 2012. It then moved 25 km to Eckwardersiel near Wilhelmshaven on the mainland on 11 August where it was seen with the black-ringed individual on 24 August. The black-ringed bird was ringed there as a nestling, also on 30 May 2012, by the same ringers! There have been no further records of them since 24 August until they both turned up in Guernsey on 7 October 2012. 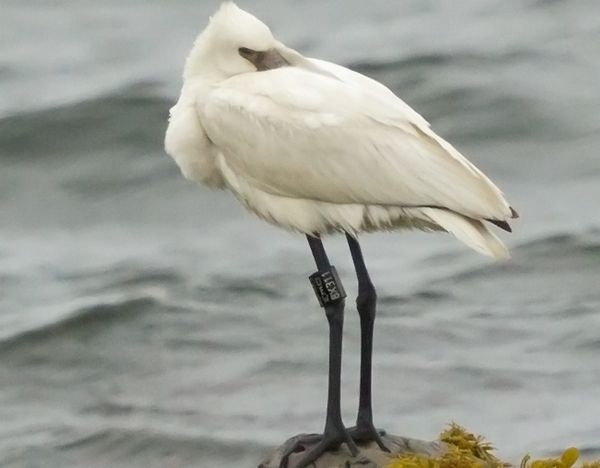 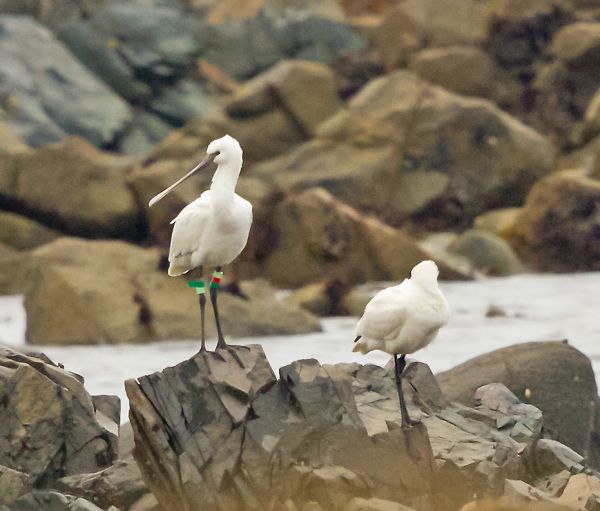 Spoonbills at Fort Le Crocq 07 October 2012 (c) Tony Loaring
The Guernsey Gulls Blog has been quiet for nearly two weeks because I have been in southern Portugal in search of colour-ringed Lesser Black-backed Gulls - especially those ringed in the Bailiwick of Guernsey. I will make some separate postings regarding the success of this trip.
Today I made my first run down Guernsey's west coast to see what has happened to the LBBG and GBBG flocks along the coast. I was surprised to find c 300 LBBGs - including 11 of our locally colour-ringed birds. At least one third of the gulls could not be checked. Amongst the flock on Vazon Beach was a 2nd year Blue TZ.AY - ringed in Belgium.
GBBGs were not numerous - perhaps 120 birds, but the flock included my first Norwegian-ringed bird of the autumn - Black JA612 (ringed as a chick in Vest-Agder in 2008, and seen in several previous autumns in Guernsey!). There were also three French-ringed GBBGs (two Chausey and one from Le Havre).
Posted by Guernsey Gulls at 17:08