The reason my blog has been quiet for a week is  because I was in Alderney on our very enjoyable, relaxing family holiday.  Alderney is such a lovely island to visit, with its wild walks and rugged coastline.

I was not birding, although  I did take the opportunity to check out Crabby and Braye Bays on several days to look for my colour ringed Lesser Black-backed Gulls from Burhou. I was very pleased to see one adult ringed on Burhou in the summer of 2008, 15 from the summer of 2009 and 19 from 2010 - along with a dozen of this year's fledged juveniles. I also saw Blue AUC - an adult ringed in April 2007 at Gloucester landfill, England - but this is probably a bird which nests on Burhou.

The biggest surprise of the week was an adult Black-headed Gull carrying a Lithuanian colour ring. This bird - Black P547 was seen on Crabby Bay, Alderney on 28 August. It had been ringed at Dumpiai (rubbish dump), Klaipėda, Lietuva / Lithuania as a 3rd+ calendar year male on 01 April 2010 by Vytautas Pareigis and Frank Majoor. 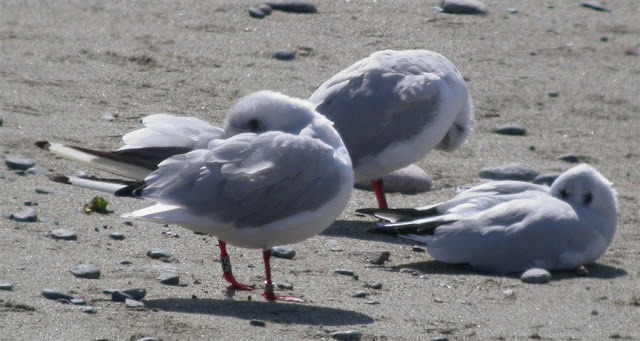