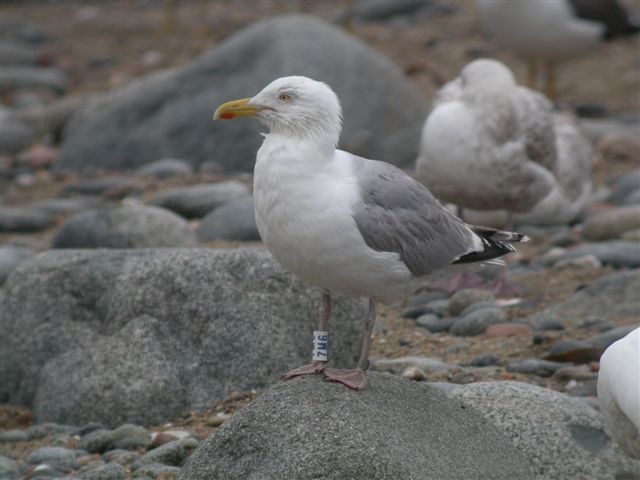 Colour ringing studies on Herring Gulls in the Bailiwick of Guernsey are showing that while some birds are largely sedentary, others migrate over medium distances. There are many records of chicks ringed by Jamie Hooper (during his ten year study from 1998-2007) wintering off the Atlantic coast of France in the Vendee and Charente-Maritime regions. In common with many other seabirds, juvenile Herring Gulls tend to migrate further distances than more mature birds…although again there are plenty of examples of adult Herring Gulls migrating several hundred km south to winter.

One of the most well travelled of all Jamie’s gulls is White 7M6 – a bird ringed as a chick on the cliffs at Pleinmont, Guernsey in July 2003. When it was first seen in November of that year at the mouth of the Douro River in Portugal suspicions arose that it may in fact be a Lesser Black-backed Gull which had been mis-identified when ringed as a chick (not that difficult to do!). However…Jamie’s reputation remained intact when this bird was seen again and reported as a Herring Gull the following November a little to the north in Portugal.

The gull then disappeared again for another 18 months, before being seen in the Basque Country in NE Spain in March 2006. It was then seen at Lemoiz, Vizcaya, Spain from 22 August to 14 December 2007, before going missing again for just over a year. The next report came in from Lemoiz again the following winter on 19 January 2009.

Not unexpectedly, as most Herring Gulls do return to their natal areas, this gull turned up in Guernsey on 22 March 2009. I recorded it many times to 22 August…then it was not seen again in Guernsey until 25 February the following year. Now in its 7th calendar year the gull is fully adult and may well have been breeding already for several years. I saw it in Guernsey until 29 July this year.

What is therefore somewhat surprising is that on 29 August 2010 and 08 September 2010 this mature gull was seen back at Lemoiz, Vizcaya, Spain by Juan Mª Domínguez Robledo . It would seem that this Herring Gull is remaining faithful to its wintering areas, despite its maturity. Very few Guernsey Herring Gulls make such a long journey at any age! 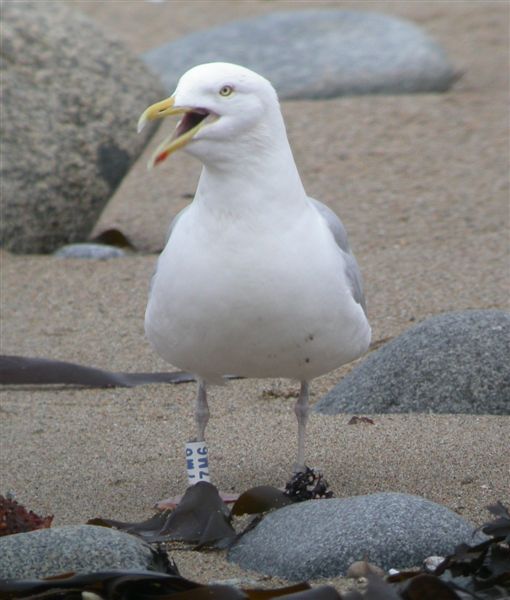 P.S. If any Guernsey birders want to see this special Herring Gull - keep a close look out on the beaches at the north of the island from early next year - when hopefully it will be back with us. However...it now carries colour ring White 2.AP6 (having been re-ringed in May 2010 when trapped at Chouet Landfill).
Posted by Guernsey Gulls at 05:31