Colour ringing studies of Herring Gulls breeding in the Bailiwick of Guernsey show that many gulls migrate away from Guernsey at the end of the breeding season. The majority of the gulls that spend the autumn and at least a part of the winter away from the Channel Islands travel to France – with reports from the coasts and inland landfill sites from Pas-de-Calais and Somme in the north-east (few) to the adjacent coasts of Manche, Cotes d’Armor and Finistere, with the majority flying as far as south as Morbihan, Vendee, Loire-Atlantique and Charente-Maritime (few). There are even a few exceptional cases of Herring Gulls migrating to northern Spain.
Following the 2010 breeding season, the earliest returning gull was back in Guernsey on 13 November (two birds from nearby Manche). A further six Herring Gulls returned in December, with the majority (14) being seen again in Guernsey in January. One of the two birds that was known to have wintered in northern Spain was back home by 22nd January. There are no doubt still many birds to arrive back in the Islands ahead of the 2011 breeding season. However…it is notable how early some of the Herring Gulls return to the island – especially compared to Lesser Black-backed Gulls, which of course travel much further distances south to winter in Iberia (majority) and NW Africa. 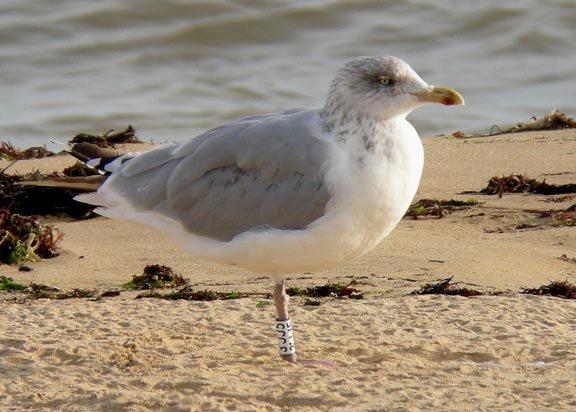