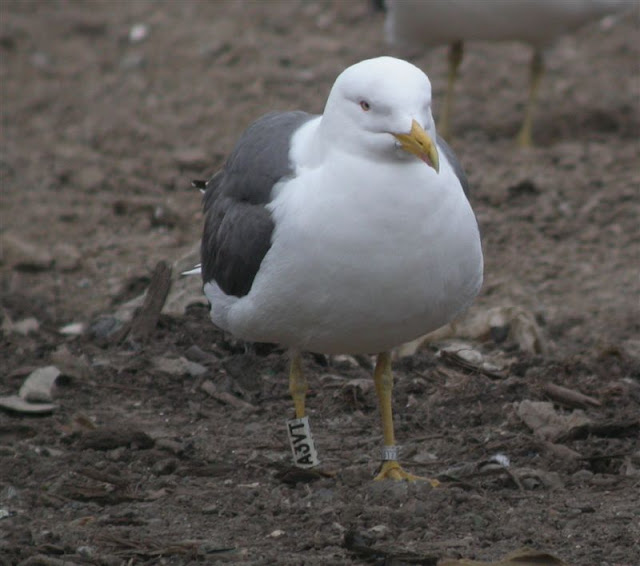 Lesser Black-backed Gull White A3VT - Chouet Landfill 14/04/10 - PKV
On 13 and 14 April 2010 I saw Lesser Black-backed Gull White A3VT at Chouet – both in the landfill and on the beach. I have received news that this bird was ringed as a first year by Shawn Clements at the RSPCA West Hatch Wildlife Centre – having been picked up oiled at Newport, Wales on 04/07/2006. It was treated, ringed and then released on 07/08/2006. This bird then migrated south and was seen at Figuera da Foz, Extremadura, Portugal on 06 and 07/11/2006. It was next seen back in England at Gloucester Landfill on 18/09/2009. Clearly it has retained its migratory habit as it was seen in Guernsey as a spring passage migrant.


White A3VT is yet another fine example of the value of the work put in by wildlife rescue centres in rehabilitating sick and injured birds. Well done to Shawn and his hard working colleagues!
Posted by Guernsey Gulls at 18:05