On 13th January 2010 Lesser Black-backed Gull (LBBG) White 8.Z0 was seen at Porto de Lagos landfill, near Portimao, Algarve, Portugal by Stef Waasdorp. Today this gull is back home here in Guernsey…although to be accurate it actually nests in one of the colonies on Sark. Given the cold weather here I’m surprised it hasn’t stayed longer in Portugal, but it was noticeable today that several new LBBGs have arrived. There were 10 birds on Chouet landfill Beach, and as well as White 8.Z0 there was White 1.T6. This Lesser Black-backed Gull was ringed as a chick in Sark in 1999, and caught in our garden in Guernsey in May 2009 as an adult female (when the colour ring was added). Although I saw this bird 15 times in 2009 (last on 16th August), there were no reports of it over the winter period. 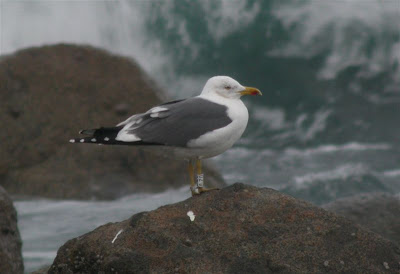 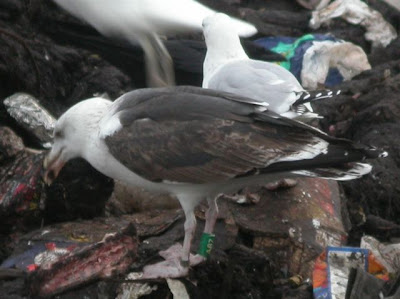 After being closed on Sunday, c 1,500 Herring Gulls were feeding voraciously at Chouet landfill. 57 local colour ringed birds recorded including White 1.XX7 (ringed as an adult male on 25/05/09 in our garden in Guernsey), which had been seen on 25/10/09 at Beddington Sewage Farm, Greater London, England (Johnny Allan). It is noticeable now how several Herring Gulls which have been recorded away from the island over the autumn/winter period are now turning up in Guernsey again. 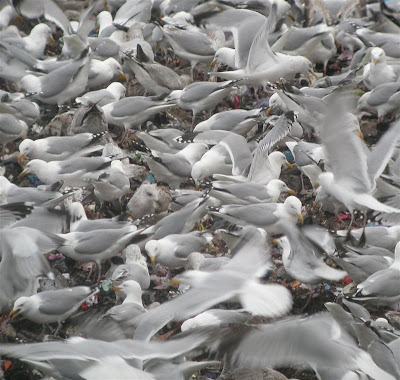 All in all an excellent gull watching session before work!
Posted by Guernsey Gulls at 17:19