Two of the 128 Guernsey-colour ringed Herring Gulls seen at Chouet on 21 January 2010 had returned from France. Both of these gulls had been ringed as adult females on 5th June 2009 at Chouet landfill, and both can be assumed to be local nesting birds.

The movements of Guernsey nesting Herring Gulls outside the breeding season are interesting, for while some birds remain in Guernsey all year, others (including 1st winter, immature and adult birds) disperse to France - with the most common direction being south to Vendee. A smaller number of birds move north to the south coast of England with a few birds reaching the landfill sites around Gloucester. 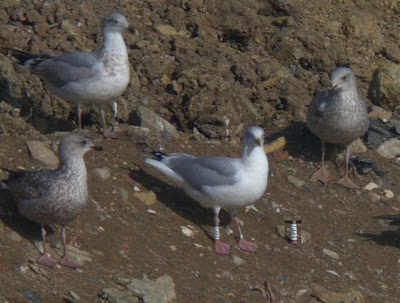