A biting cold strong NW wind rather dampened the gull watching at Chouet landfill this morning. The 54 colour ring reads were hard work  with most of the birds being somewhat distant too. An adult Yellow-legged Gull was a bonus.

Amongst the Herring Gulls were Blue BHC (originally ringed at Gloucester landfill as a 2nd winter in January 2007 - Peter Stewart - seen eight times in Guernsey since 17/02/09), alongside White 1.XX7 (ringed in our garden at Ty Coed in May 2009- but then recorded on 25 October in Greater London, England (Johnny Allan). First recorded back in Guernsey on 25 January 2010. 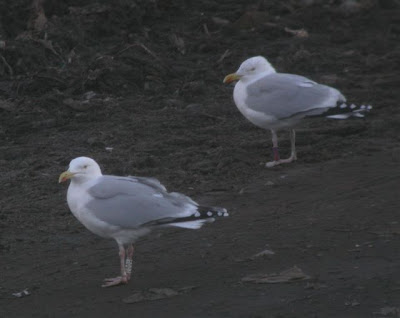 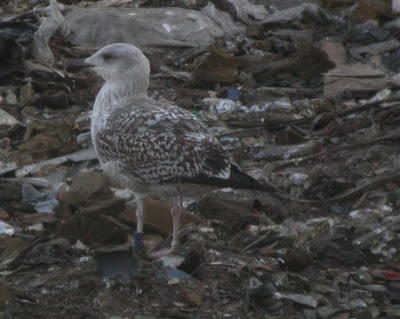 GBBG Blue 73D Chouet landfill - P K Veron
Also seen were Green E.87 (1st Winter) and Green A87 (3rd winter) - both from Chausey Islands, Manche (Seb Provost). The former seen on 02, 25 and 30 January in Guernsey, while the latter has been seen 10 times since 16/10/08 (with a record from Erquy, Manche, France in between).
Once again Lesser Black-backed Gulls had increased in number to 27 birds - but the only colour ringed bird was White 3.T8 - which was the first of my known gulls to come back to Guernsey on 15 January 2009.
Posted by Guernsey Gulls at 12:33