Blue 30C (from Le Havre, Seine-Maritime – Gilles Le Guillou) is a very well known gull. This was my 43rd encounter with this bird since my first sighting on 18 September 2008. The two other French GBBGs were both from Chausey Islands, Manche (Seb Provost). Both were known to me. Green B.36 (ringed as a chick in June 2008) was seen in Guernsey from 12-26 February 2009, before turning up in Granville Port on 20 June 2009 (Jaques Alamargot). It re-appeared at Chouet landfill, Guernsey on 15 January 2010. Green E.04 (a chick from the summer of 2009) was seen in Guernsey at Chouet on 08 and 10 September 2009. It then disappeared until being seen again today.

At lunchtime Catherine and I went to St Peter Port Harbour to feed the local Herring Gulls (which were certainly very hungry). We recorded three colour ringed Herring Gulls (all had been ringed as chicks - two at Jerbourg Cliffs, Guernsey in June 2000 and one on Sark in June 2009). 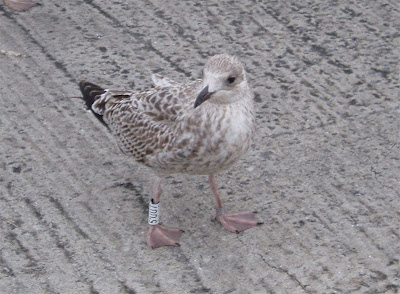