Amongst the small number of arrivals of Lesser Black-backed Gulls in Guernsey in the past 24 hours has come Blue ACE - a bird ringed as an adult in November 2006 at Bishop's Cleeve landfill, Cheltenham, England by the Severn Estuary Gull Group.  It was recorded there again (or at nearby Gloucester Landfill ) in the Novembers of 2007 and 2008 (John Sanders). I then saw this bird seven times at Chouet, Guernsey between 14 February and 29 April 2009. It most probably nests in the Channel Islands and winters around the SW of England. In November and December 2009 John Sanders once again recorded Blue ACE at Bishop's Cleeve landfill. 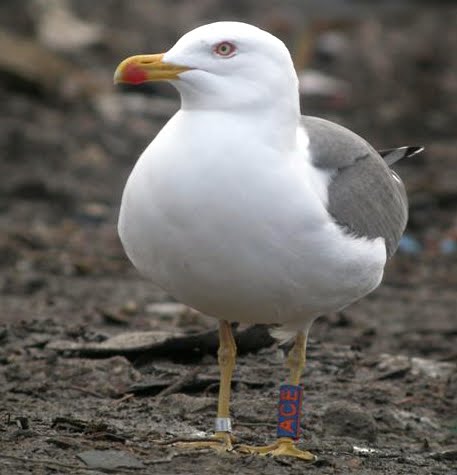