Hot on the heels of the story of Lesser Black-backed Gull Green X:05, coms the sighting of Great Black-backed Gull Blue 71D at Chouet Beach, Guernsey (on 25 March 2010). This gull was ringed as a chick by Gilles Le Guillou in the port of Le Havre, Seine-Maritime, France on 25 June 2008. However...Gilles tells me that this gull had been found on the street having fallen off the roof where it was being reared. At 32 days it weighed only 700 gms (about half the average for this age). He and Christine Blaize, CHENE therefore rescued this gull.
It has been seen in Le Havre in every month from August 2008 to December 2009 (inclusive). It was also seen in March 2010 - up to 14 March - shortly before it travelled the 200km or so west to Guernsey. 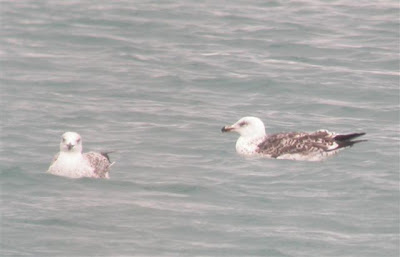 GBBG Blue 71D Chouet Beach 25 March 2010
I have just come back from two days in Sark, and will shortly write a blog entry for that trip updating on gull and other seabird news from that island.
Posted by Guernsey Gulls at 12:23