Salva Garcia was back at Malaga Port, Spain today (7th February) - where amongst other colour ringed Lesser Black-backed Gulls he saw two "Guernsey Gulls" - White 0.U7 (originally ringed as an adult male at Chouet landfill on 06/06/09) - with one previous sighting at Malaga on 19/09/09 (Salva again). The other was Black 0.J3 - one of the chicks ringed on Burhou on 10 July 2009 - and previously seen at Alcazar de San Juan Landfill, Cuidad Real, Spain (Gabriél Martin) on 07 and 12 December 2009. Interestingly...this is the first "Guernsey"1st Winter Lesser Black-backed Gull from 2009 seen at Malaga by Salva (compared to nine ringed as adults in 2009). 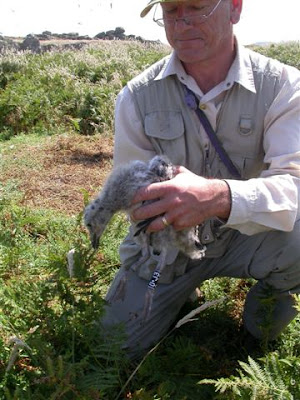