Catherine and I took a day off work today, and enjoyed a full morning's gull watching on the north and west coasts of Guernsey. It is still very chilly today with a biting cold easterly wind. However...a few more Lesser Black-backed Gulls were at Chouet landfill and its adjacent Beach (55+). This included another returning bird - White 0.U2 (ringed as an adult female on 06/06/09 at Chouet landfill - and observed five times in Guernsey from 18 July to 15 August before disappearing for (unknown) wintering grounds).

There were a further 12 Lesser Black-backed Gulls down the west coast - including White 3.T8 (an adult ringed on 04/06/09 at Chouet landfill - seen four times in Guernsey from 18 July to 13 August - then back in Guernsey from (unknown) wintering grounds on 15 January 2010).

Five French-ringed Great Black-backed Gulls were seen at Chouet landfill - Blue 47D - a very regular bird from Gilles Le Guillou's project based in Seine-Maritime, France, and four from Chausey islands, Manche, France (Seb Provost). Three of these four birds are well known - all having been seen previously at Chouet, but Green E.95 was the first record of this gull in Guernsey. 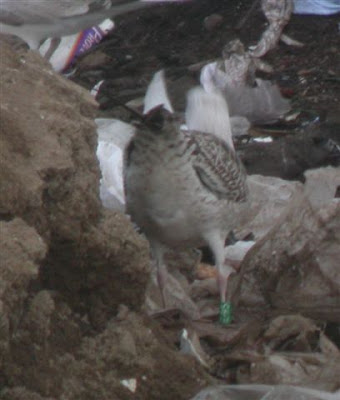