Another Lesser Black-backed Gull Comes Home for the Breeding Season

An hour before work outside Chouet landfill was well rewarded with 54 colour ring reads. Pride of place went to Lesser Black-backed Gull White 9.Z5 which Catherine and I colour ringed in our garden at Ty Coed on 24/05/09 (as an adult female). I saw this bird twice more at Chouet in 2009 - on 22nd and 27th August before it disappeared for the winter. There were no reports over the autumn/winter, but today it is back at Chouet - no doubt returning early to prepare for the 2010 breeding season. 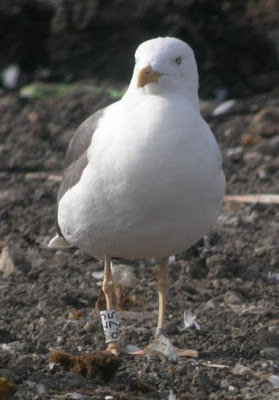 LBBG White 9.Z5 at Chouet landfill 22/08/09 - P K Veron
Amongst the 50 cr Herring Gulls was White 9C5 - originally ringed by Jamie Hooper in June 1999 as a chick at Pleinmont Cliffs in the south-west corner of Guernsey. This was my first sighting of this gull - and indeed the first in Guernsey since ringing. There were two previous reports - both from France - 26 March 2003 at Donville les Bains, Manche (P Desgué) and on 30 October 2006 on the wonderful island of Hoedic, Morbihan (M Fasol).
Also seen was Herring Gull (1st winter) Green BP8 (or perhaps BPB?) first seen on 26/01/10 - still of unknown origin, as well as Orange JR.2T (1st winter) from Pitsea, Essex (seen five times at Chouet since 30 December 2009).
Posted by Guernsey Gulls at 13:57