On a quiet morning in Guernsey for gulls, it is good to catch up on news from Spain...with reports of adult Guernsey Lesser Black-backed Gulls at Pinto landfill, Madrid (Javier Marchamalo) and Malaga Port (Salva Garcia). White 9.U0 (ringed as a breeding adult female on Burhou, Alderney in June 2009) was seen at Pinto on 5th February. It had previously been recorded on 26 August 2009 at Esmelle Beach, A Coruna, Spain by Antonio Gutierrez. 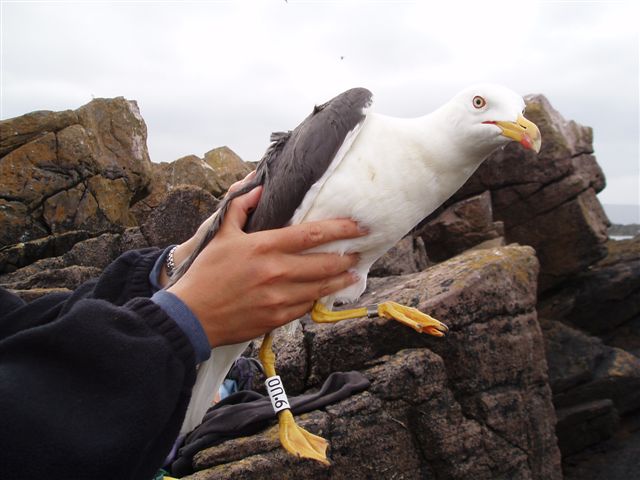 LBBG White 9.U0 Burhou, Alderney - June 2009 - PKV
LBBG White 9.U0 Esmelle Beach, A Coruna, Spain - Antonio Gutierrez
LBBG White 3.U5 (adult male ringed at the nest on Burhou, Alderney in June 2009 had previously been seen at Quarteira, Portugal (Michael Davis) from 24/09/09 - 01/10/09, and then at Malaga Port, Spain (Salva Garcia) on 05/12/09 and 06/02/10.
With updates on foreign colour ringed birds seen in Guernsey over the past few days - Roland-Jan Buijs has confimed that Lesser Black-backed Gull Red MF was ringed as an adult male on 15 May 2007 at Vlissengen-Oost, Zeeland, Netherlands. It had previously been seen at Blaringhem, Nord, France on 04/09/07 and Hersin-Coupigny, Pas-de-Calais, France on 07/10/08 (both Harry Vercruijsse).
Gilles Le Guillou also confirmed that Great Black-backed Gull Black 64E had been ringed as a chick in Le Havre Port on 25 June 2009 (see photo of the nesting site below!). 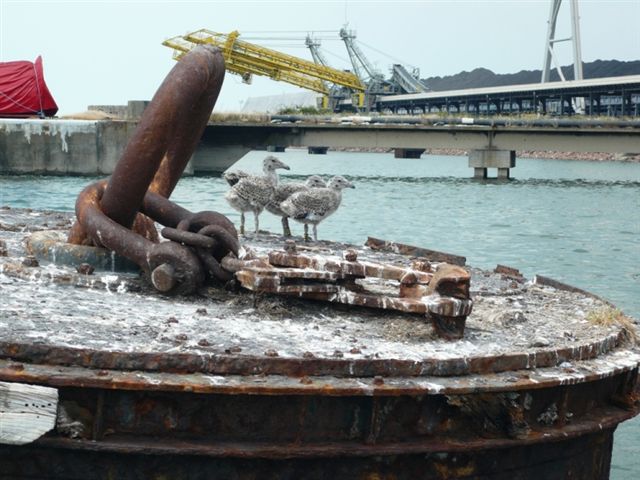