It was a rather odd morning at Chouet landfill today in that the gulls never came in large numbers and there seemed to be rather few locally colour ringed Herring Gulls (45). Amongst the 32 Lesser Black-backed Gulls recorded there were no Guernsey colour ringed birds. However...the highlight was Brown 6HF - a bird ringed as a chick on Flatholm, Wales on 03/07/1997 by Brian Bailey. This bird was seen in its 1st summer at Marais D'Olonne, Vendee, France on 25/05/1998, and then at Agroud, Morocco on 01 and 08/10/1998. It was then not recorded again until John Sanders saw it at Gloucester landfill, England on 24/02/09. This is the first Lesser Black-backed Gull seen at Chouet Landfill, which has been recorded in Africa!

There were also relatively few Great Black-backed Gulls today (c 70) ...but a new one was seen - Black 64E from Seine-Maritime, France (Gilles Le Guillou), along with Blue 47D a well known gull  from the same area and same project.

All in all...another fine (if  not quite typical day). 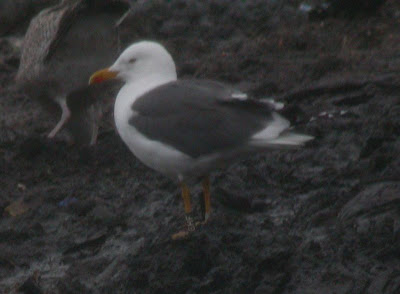 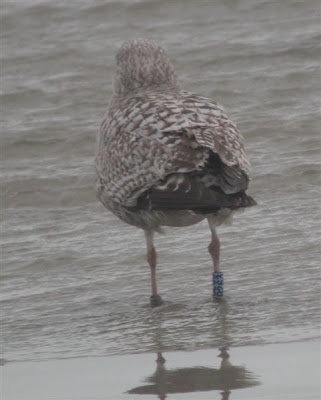 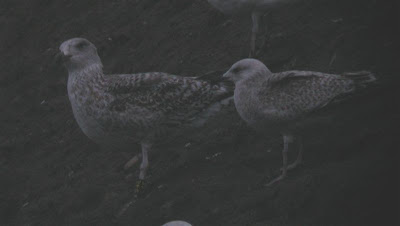 Great B B Gull Black 64E Chouet Landfill - PKV
An update from yesterday - Peter Stewart has informed me that Lesser Black-backed Gull Blue CZU (recorded at Chouet landfill on 05/02/10) had been ringed as an adult at Stoke Orchard landfill, Gloucester, England on 23/02/08. It had then been seen several more times in the Gloucester area in February and November 2008, before being seen at Bowley, Great Harwood, Lancashire, England on 03/08/09. It was then back in Gloucestershire in November 2009 (up to 4th)...then at Colmenar Viejo Landfill, Madrid, Spain (Delfin Gonzalez) on 31/01/10 (only five days before being seen in Guernsey).
It is fascinating to see how late some of these Lesser Black-backed Gulls stay in England in winter...and how early they return.
Posted by Guernsey Gulls at 18:33