The 1st Winter Glaucous Gull Larus hyperboreus was still at Chouet landfill this morning. There was another very fine showing of Herring Gulls at the landfill with several thousand gulls - including 105 locally colour ringed Herring Gulls (80 from my project and 25 from Jamie Hooper's earlier study). There were more Great Black-backed Gulls today with circa 75 birds - including two known gulls from the Chausey Islands, Manche, France - (Seb Provost) Green B.09 and Green E.87.

There was again little evidence of passage amongst the 50 Lesser Black-backed Gulls. The Guernsey colour-ringed bird (White 9.Z5) and metal ringed gull (E 4421) had both been back in Guernsey since 1st and 5th February 2010 respectively. An adult Lesser Black-backed Gull from David Sowter's projects in the north of England was briefly glimpsed, but the code could not be read before the bird flew...and despite much effort I could not relocate it (sorry David!). 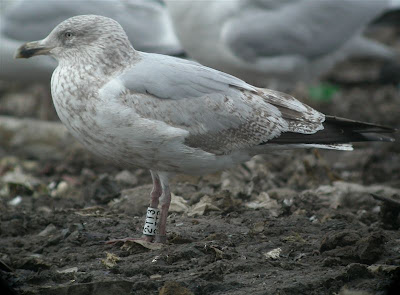 Herring Gull White 2.TT3 at Chouet landfill Feb 10 - PKV
Exciting and valuable news in from Alderney today - courtesy of Alastair Riley - with the first sighting of an adult Lesser Black-backed Gull on the beach at Crabby on Friday 12th February. As expected this is a little later than the first returning gulls in Guernsey. I suspect (and hope to be able to prove this year) that the truly  "wild" colonies of Lesser Black-backed Gulls around Alderney actually breed later than those around Guernsey, Herm and Sark. I believe this to be the case and it is likely to result from these gulls feeding at the landfill site at Chouet, rather than relying entirely upon "natural" food (like the Alderney birds).
Posted by Guernsey Gulls at 19:36