January provided a reasonable start to the gull colour ring reading year, with a total of 778 ring reads. Of these 686 were Herring Gulls - which included 186 different birds from my project (commenced in earnest in 2009). This included birds which had earlier been seen ouside the Channel Islands as follows:-

Greater London, England - one, and France (three) one each in Manche, Finistere and Loire-Atlantique. The only outward movement of one of my Herring Gulls in January was a bird which moved (unusually) to Suffolk, England.

114 Herring Gulls from other projects were also seen - the vast majority of these were Guernsey birds ringed by Jamie Hooper in his study run from 1998-2007 (inclusive). Of these birds 12 had been involved in movements to/from France since ringing as follows:-

Seine-Maritime (two), Calvados (one), Manche (two), Finistere (one), Morbihan (two), Vendee (five) and Charente maritime (one) - with one of these birds being seen in both Vendee and Charente-Maritime and another in Manche and Morbihan.

Four of Jamie's Herring Gulls which had been seen at some stage of their lives in England were also seen (Gloucester - one, Hampshire - two and Dorset - one). 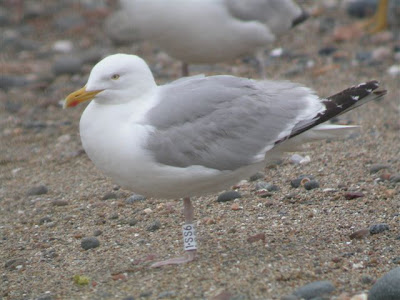